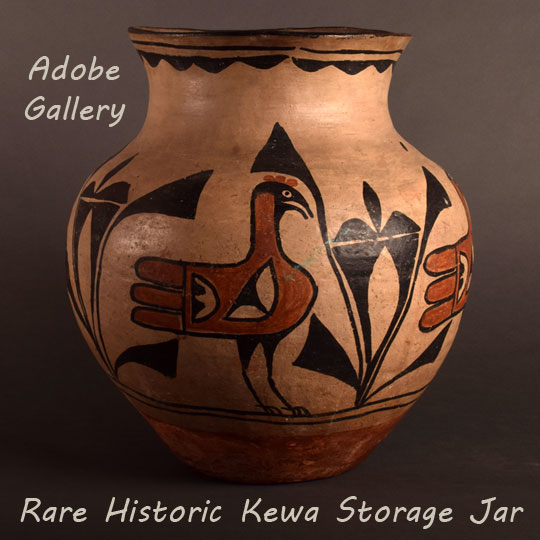 Most storage jars were made in the nineteenth century. Rarely were ones this large made in the 20th Century. Four birds in polychrome design rest on the lower framing lines, and four floral elements complete the design. Below the single framing line at the rim are cloud elements.

Made circa 1920, this vessel exhibits the classic traits of late Santo Domingo Polychrome. The neck interior is red-slipped, with a black rim top. The under body is stone-polished bare paste with a one-inch rag-wiped red band. The cream/off-white is rag-wiped bentonite slip with black vegetal designs, all of which are interrupted with one vertically-oriented ceremonial break.

During the time when this storage jar was made, potters did not sign their works.  As many stated at the time, and later, when asked why they did not sign their pottery, the common answer was why should I sign it? I know I made it and I know which family members made their works.  Each potter had a distinct design repertoire that is recognizable by family members so putting their name on a vessel was unnecessary until the mid-twentieth century when collectors expressed an interest for signatures.

It appears that pottery at Santo Domingo Pueblo was traditionally black-on-cream until the late 1800s, at which time red was added to the design. Allan Hayes, in his book “Southwestern Pottery Anasazi to Zuni” stated that polychrome design was well established by the time Stevenson visited in the 1880s. The Smithsonian collections in 1879 and 1880 were sparse in pottery: explanation being that the potters only made what they needed. This changed later when a railroad stop was built near the pueblo and potters hastily switched to making pottery to sell to the travelers.  Apparently there was no pressure by the travelers to document the maker of their purchase, so the lack of signatures on pottery continued for another few decades.

The birds on this jar have beaks that could indicate parrots, but could be any bird.  Jonathan Batkin, in his book “Pottery of the Pueblos of New Mexico 1700-1940” indicates that “birds became popular motifs around 1900.” A bird with a feather topknot, indication of quail, is often seen on earlier pottery.