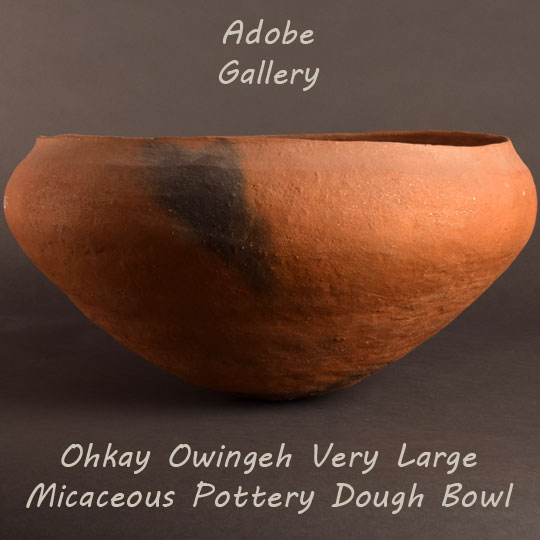 We have assigned the origin of this very large historic micaceous pottery dough bowl to a potter at Ohkay Owingeh Pueblo and a time period dating to the late 1800s. It is near to impossible to distinguish micaceous pottery from the northern pueblos of Taos, Picuris, Nambe, Pojoaque and Ohkay Owingeh. This piece could have originated at any of those pueblos, but Ohkay Owingeh was selected based on the slight indentation of the rim.

When this large dough bowl was brought in to us, it was by the two nephews of the previous owner, Emilio Naranjo (1916-2008), of Espanola.  This was another reason to make an attribution to San Juan Pueblo as the origin, as Espanola is only about 3 miles from the pueblo.

Condition:  good for a bowl of this vintage—any cracks are stabilized without being hidden.

Provenance: this Ohkay Owingeh Very Large Micaceous Historic Pottery Dough Bowl is from the estate of Emilio Naranjo (1916-2008), a long-time respected politician from Espanola, New Mexico. Naranjo was a state senator and is credited with single-handedly building the Rio Arriba County Democratic Party and then reigning over it for more than four decades.

All That Glitters: The Emergence of Native American Micaceous Art Pottery in Northern New Mexico [Paperback Edition]
by Duane Anderson