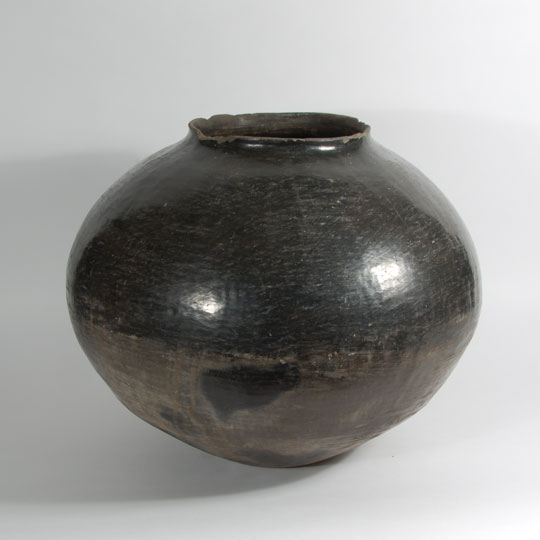 This large black-over-gray storage jar is from the late 19th century. It's a perfect example of Ohkay Owingeh pottery of the period. The globular shape of the vessel, the short neck, and the rough but consistent polish are standard fare for the period. Its size-16 inches in height by 20 inches in diameter-is visually impressive, but it's actually typical for an Ohkay Owingeh storage jar to be this large. Most importantly, the vessel is gorgeous. Its simplicity is its most striking attribute. This is a perfect example of the very finest pottery produced by this pueblo.

When conquistador Oñate arrived in 1598 from México, accompanied by a caravan of Catholic missionaries, a thousand soldiers, colonists, and Tlaxcalan Mexican Indians, and landed at present-day Ohkay Owingeh on July 11, 1598, he was met graciously and offered quarters at the pueblo for him and his party. He promptly renamed the village San Juan de los Caballeros, after his patron saint, John the Baptist. He then established the first Spanish-Catholic capital there. The Spanish capital would be moved in 1610 to La Villa Real de la Santa Fe de San Francisco de Asís, known today as Santa Fe.

During the twelve years of the Spanish living at the pueblo, there appears to have been no influence on the pottery-making processes of the village, but by the 1700s, there were noticeable changes on the other regional Tewa-speaking pueblos. Still later, with the opening of the Santa Fe Trail in 1821 and the arrival of the transcontinental railroad in 1880, change became inevitable at pueblos located close to the non-Indian populations.

San Juan Pueblo, now Ohkay Owingeh Pueblo, was the exception. The potters stuck to their existing pottery traditions of simple undecorated utilitarian wares that were so beautiful in vessel shape and simple slipped surfaces highlighted by fire clouds. Even today, a hundred years after the pueblo abandoned its traditional style for a more modern style to appeal to tourists and collectors, the beautiful undecorated wares of the pueblo are still capturing the eyes of collectors.

The pre-1900s vessels from Ohkay Owingeh were not as highly polished as today's blackware from the other Tewa pueblos, but the lack of severe polishing provided slight irregularities in the surface of a vessel from which the reflected light is pleasantly muted. Most vessels were slipped with a deep red slip on the upper two-thirds of the body, leaving the lower one-third without slip. The entire vessel was then polished, inside and out, to a hard finish. The red-over-tan finished product was then fired—either in an oxidizing or reduction firing—from which would be obtained a red-over-tan or black-over-gray finished product. This style began to lose favor in the mid-1930s when the pueblo women decided to create pottery that would have a stronger appeal to tourists and collectors. That new style, however, was within tradition at the pueblo as it was based on prehistoric wares documented from Ohkay Owingeh.

Condition: excellent condition for a piece of its age—minor abrasions and rim chips, signs of use at the pueblo

Recommended Reading:  Pueblo Pottery of the New Mexico Indians: Ever Constant Ever Changing by Betty Toulouse