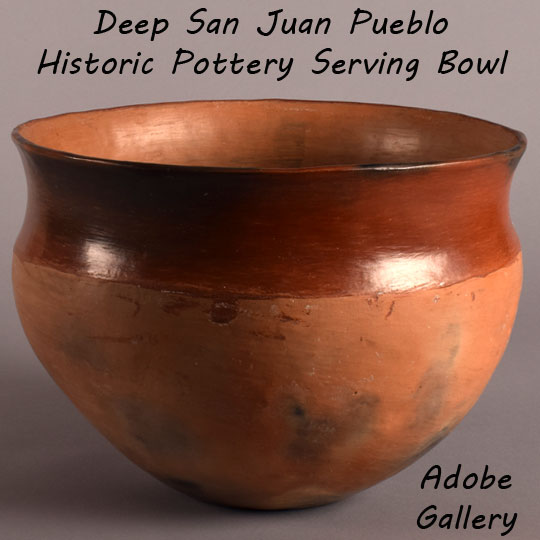 There are certain styles of historic pottery from San Juan Pueblo that seem to never have changed in shape or design.  This plainware deep bowl is one of those that we can say is “traditional San Juan” in every detail. The bowl was constructed from traditional San Juan Pueblo clay with a small amount of mica within the clay.  The natural clay was stone polished, without the application of a slip to the surface, except for the red slip around the exterior rim.  The red slip was also stone polished.

The vessel shape is globular except for the neck area, which was traditionally applied in a concave finish, over which the red slip was applied.  The decoration, other than the red slip, consists of faint fire clouds.  That had always been the tradition at San Juan Pueblo, until the 1930s when a new style pottery was adapted as a product aimed at appealing to an outside market.

For the collector who prefers to collect only traditional historic pottery, this is the one to consider.  It is probably from the 1920s-1930s decades.

Note: Our use of "San Juan Pueblo" in lieu of "Ohkay Owingeh" is only related to pottery, not to the pueblo. It is our opinion that the pottery classification, i.e. San Juan Red-over-tan, is still the appropriate name for the classification of pottery. There is no offence meant by our use of the Spanish-installed name to the pueblo when referring to its pottery.

Condition: very good condition with some professional and non-professional rim repairs.  They are not obtrusive but could be improved if one wished to do so.  We will be happy to have that professionally done if requested.