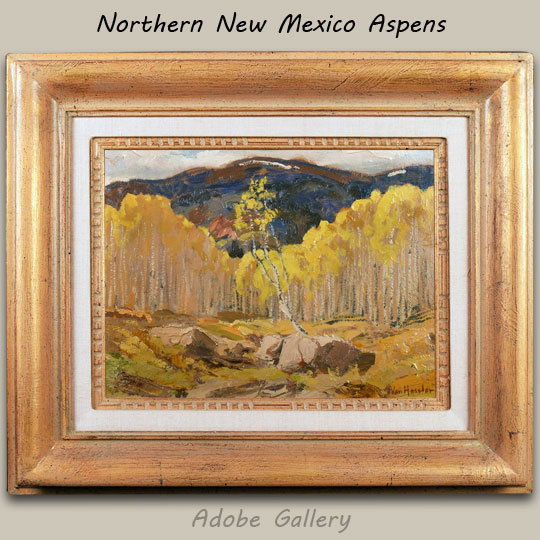 Von Hassler used a combination of paintbrush and palette knife in this painting, resulting in a richly textured image. In the foreground, we see a cluster of rocks in a dry riverbed, with a single Aspen emerging.  This central area is where Von Hassler varies from his norm most significantly.  Thick streaks of paint create an impression of each rock, before combining with other colors to create the impression of the group as a whole.  We see hints of this sort of work in his other paintings, but it's rarely as dramatic as it is here. It works wonderfully, and the earthy fall tones amplify the effects of the brushwork.  In the background, we see a field of Aspens and a mountain ridge. These distant forms look more like what we expect of Von Hassler while still maintaining the dreamlike feel of the central area.  When viewed from a distance, the scene looks quite realistic; this reminds the viewer that Von Hassler knew exactly what he was doing when he created this wonderful painting.

This painting is not dated.  It is signed Von Hassler in lower right.

Carl Von Hassler (1887-1969), an artist who moved to New Mexico in the early 1920s, was known as the Dean of the Albuquerque Art Colony. Born in Bremen, Germany, Von Hassler attended the Dusseldorf Art Academy. When he came to the United States, he lived for a while in Greenwich Village in New York and was a member of the famed painters who called themselves the Greenwich Ash Can Group.  In the years since his passing, he has come to be regarded as one of the best and most collectible Albuquerque artists. His works are included in many prominent public and private collections and have been exhibited in museums around the Southwest. In his early years in Albuquerque, Von Hassler's studio was in the original Casa de Armijo (now La Placita Restaurant) in Albuquerque's Old Town. He was best known for his traditional realistic landscapes of New Mexico and his Indian portraits.

Provenance: from the collection of a long-time resident of Albuquerque

AN ILLUSTRATED HISTORY OF NEW MEXICO [SOLD]
by