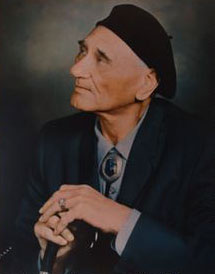 Artist Carl Von Hassler frequently painted cottonwood forests, and he did so with incredible skill.  His bright yellow cottonwoods are instantly recognizable to New Mexico collectors. This untitled oil painting is a landscape, as per Von Hassler’s usual, but it differs greatly from what the artist is known.  It’s a mountain scene—all blues, greens, and grays instead of yellows, oranges and reds—with nary a cottonwood in sight. Here, the artist traded in his bright, warm colors in favor of a cooler palette, resulting in an exceptional and unusual piece.  In the immediate foreground lies a river, upon which the viewer sees a reflection of the landscape that lies on its other side.  Just past the river, a sparse forest is spread out over a rocky hillside. As the hill grows higher and steeper, greens and blues give way to grays and purples.  Behind it, another mountain grows up in the opposite direction, meeting the first mountain near the center of the image. This convergence creates a “V” shaped area, within which Von Hassler painted steep mountain canyons and a cloudy sky.  The painting is cool and dark, but it feels just as inviting as his warm, bright compositions. It’s surprising that Von Hassler didn’t stray from his norm more often, as this image proves that he could do so gracefully.

Carl Von Hassler (1887-1969), who moved to Albuquerque, New Mexico, in the early 1920s, was known as the “Dean of the Albuquerque Art Colony.” Born in Bremen, Germany, Von Hassler attended the Dusseldorf Art Academy. When he came to the United States, he lived for a while in Greenwich Village in New York and was a member of the famed painters who called themselves the “Greenwich Ash Can Group.”  In the years since his passing, he has come to be regarded as one of the best and most collectible Albuquerque artists. His works are included in many prominent public and private collections and have been exhibited in museums around the Southwest.

In his early years in Albuquerque, Von Hassler's studio was in the original Casa de Armijo (now La Placita Restaurant) in Old Town. He was best known for his traditional realistic landscapes of New Mexico and his Indian portraits. He spent almost half of his 47 years there developing a new painting technique that caused a stir in art circles. "I invented it myself," the artist said. "It is known to no one else."  His paintings had an almost ceramic quality with colors that do not fade. He baked the paintings at up to 600 degrees. He also developed what he described as an "atomic substance" to paint on to withstand the heat. It made his paintings fire and heat resistant.

According to a few of our clients, this is a painting of Rocky Mountain National Park's Hallett Peak, as seen from Bear Lake.

A descendant of Western painter Jake Haverstick informed us that the frame was most likely made by Haverstick's wife Faye.  For a few years, Von Hassler rented a property from the Haversticks. During this time, Faye Haverstick was making custom frames in a wood shop which was adjacent to Jake's studio.
Condition: this Carl Von Hassler Original Oil Painting of Rocky Mountain National Park is in excellent condition

Provenance: from the collection of an Albuquerque, New Mexico resident 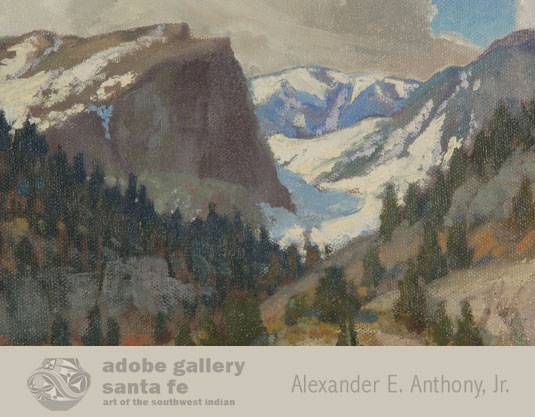