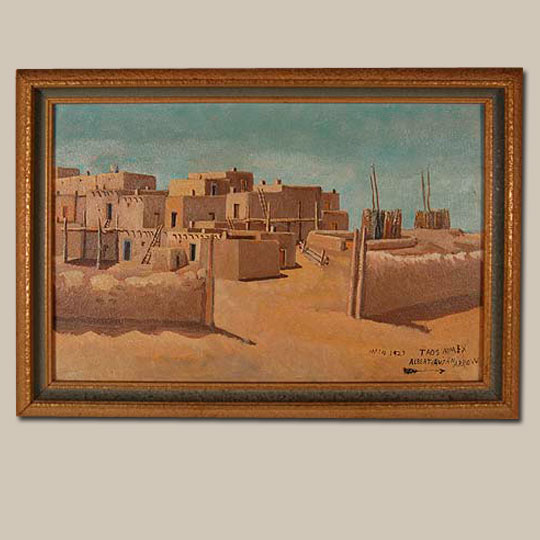 Special Value Offer:  We have been authorized to reduce the price of this painting from $3500 to $2500

Albert Lujan (1892-1948), an early Taos Pueblo painter, was ahead of his time in painting European-American style art rather than the Dorothy Dunn School of art being practiced by most of the other Native American artists of his time. His work was shunned by collectors and the Museum of New Mexico Fine Art Gallery because it was too much like that which the Taos and Santa Fe artists produced. Now he has come of age. His works are being sought by collectors and museums. A few years ago, an exhibit of some 40 paintings was put on display at the Harwood Museum in Taos featuring the works of Albert Lujan, Albert Looking Elk Martinez (also of Taos Pueblo), and Juan Mirabal (the three artists in the early 20th century who painted in the European style). There also is an excellent article on these three artists in New Mexico Magazine, January 2003.

Lujan specialized in painting the multi-storied buildings at the pueblo, usually devoid of people. Typically, these views included one of the main pueblo houses, or an isolated adobe residence, each framed by beehive ovens, majestic mountains, a beautiful blue sky, and, occasionally, a ristra of chili.

This painting is very typical of his work, but larger in size than most. He generally painted post card size pieces, but this one is considerably larger. It also is in the original frame. The painting is signed in lower right Taos N Mex Albert Lujan Arrow and dated May 13 1927. The painting and frame are in original excellent condition.