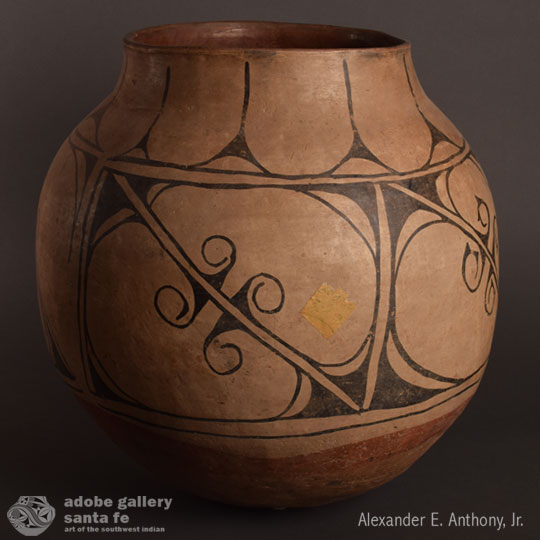 This Very Large Kiua Polychrome, Cochiti Variety, Pottery Storage Jar was beautifully constructed and provided with a loose decorative style generally associated with pre-1900 vessels. It is an excellent example of a traditional Cochiti Pueblo storage jar.  The jar was most certainly made for in-house storage of grain, corn or other dry goods. It probably dates to circa 1880 and is in excellent condition. As an intended utilitarian vessel for home use, it was not necessary, in our eyes, for the potter to spend time making black paint from leaves of the Rocky Mountain Bee plant and applying it to designs on the jar. Potters believe, however, that a pottery vessel is not completed unless decorated. That is an inherent part of making a vessel. What design is placed on a vessel is not as important as actually painting a design on the piece. Once done, the vessel is complete and ready for use. 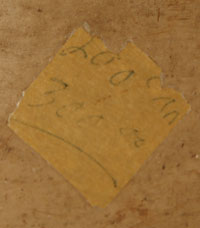 Often, a potter would make a pottery bowl to be used both as a bowl, when needed, and as a lid for a storage jar. This was far more practical than making a traditional lid that served no other function. It was also traditional to cover the opening with a towel or other fabric.  If this storage jar had routinely been covered with an upturned bowl, there would be abrasion around the trim and on the shoulder, which it does not display.

Cochiti Pueblo residents speak the Keresan language, along with their northeast Keres neighbors, Kewa and San Felipe. The three pueblos are strongly religious in both the Roman Catholic and their own Native religion. Their association with non-native peoples is not as homogenous, however. Kewa is more conservative in protecting its beliefs and lifestyle that either Cochiti or San Felipe. Cochiti is more open about painting religious symbolism on secular pots whereas Kewa would not do so. San Felipe is located closer to Interstate 25 than Cochiti and operates a casino open to the public.

Cochiti Pueblo has been in its present location since before 1700. Its current population is around 1500. It has a long history of producing beautiful pottery for use at the pueblo and for producing large quantities of figurine pottery for sale to merchants in Santa Fe. The potters seem to be better known for the figurine pottery than for vessel-shape pottery, but the latter has always been produced for pueblo use as well as for sale.

Condition: this jar is in good condition with minimal wear from use as is expected for a jar of this age.  There is an old tag attached to this jar that was left on for historical purposes.  It suggests that at one time, this jar had an asking price of only $300.

Provenance: from a private California collection.