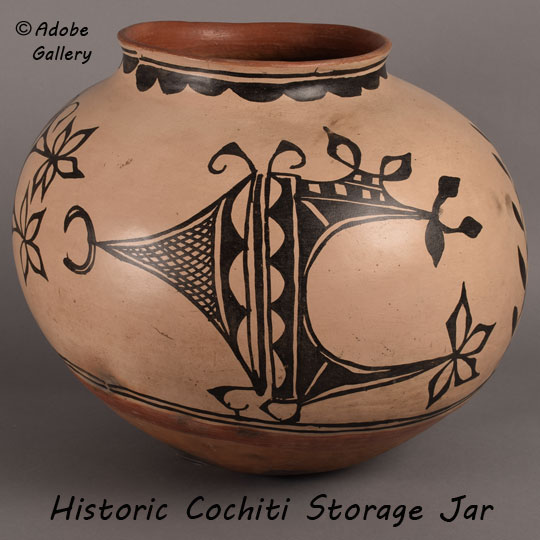 This beautiful pottery storage jar was created by an unknown Cochiti Pueblo potter. We suggest that the historic jar dates to circa 1880. This estimation is reinforced by a passage in the Cochiti Pueblo chapter of Pottery of the Pueblos of New Mexico: 1700-1940, in which author Jonathan Batkin notes that "the stone-polished red underbody band was traditional from early in the historic period to the late nineteenth century." This jar displays the stone polished band mentioned by Batkin and is similar in character to published works of that era. It also displays a red rim, which is typical of that age.

As Batkin notes, storage jars and OLLAS were not produced in large quantities at Cochiti. There were many productive potters, but most of their efforts were directed toward creating figurative works for the tourist trade. Monos figures and, later, Storytellers are the pottery forms most frequently associated with Cochiti Pueblo. Interestingly, Cochiti residents often acquired their functional OLLAS from Acoma, Zuni, and Zia. The appearance of a functional storage jar like this one on the market is rare. Even more unusual is the fact that the piece has suffered no damage in the many years since it was created. The condition of this jar is simply remarkable given its age.

The vessel shape is somewhat globular, with a base that flattens out slightly and an upturned rim. It is a massive, heavy piece, which makes it even more impressive, as the construction and firing of a vessel this large is a challenging and time-consuming process.

A single band of designs covers about three quarters of the jar, with the aforementioned polished red band dividing it and the unpolished red base. A smooth cream slip serves as the backdrop for a particularly strong example of the uniquely expressive designs that appear on historic Cochiti jars. Three large clusters made of various forms appear around the jar's exterior, incorporating rain clouds, curved triangular forms, and a variety of floral elements and plant designs. Each cluster is unique, but similarities appear between all three, which makes the design as a whole feel deliberate and cohesive.

Provenance: this Large Cochiti Pueblo Historic Storage Jar with Plant Designs is from a private collection

Reference: Pottery of the Pueblos of New Mexico: 1700-1940, Jonathan Batkin