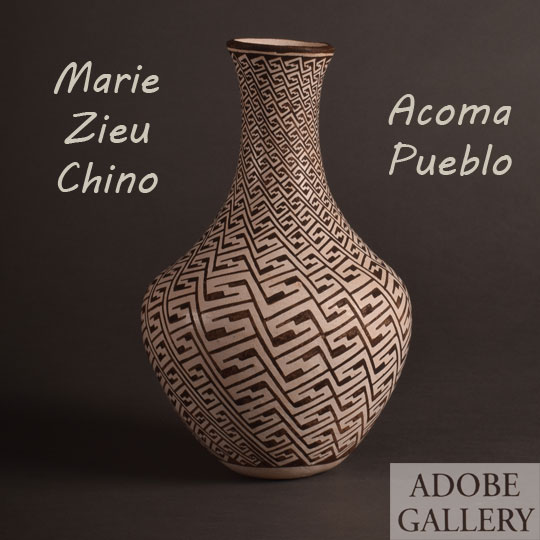 This Acoma Pueblo tall neck pottery jar by Marie Z. Chino is filled, from rim to base, with black Z-shaped elongated symbols that intersect from one curved band into the next adjacent curved band. It is almost inconceivable that one could apply such a complicated design which increases and decreases in size and curves as it descends from top to base.

The jar has a slight tilt at the rim and there are some slip abrasions and overpaint on the dark pigment.  The jar is signed Marie Z. Chino Acoma N.M. on the white underbody.

Much praise has been bestowed on Marie Z. Chino (1907-1982) for the magnificent pottery she made in the fifty years she devoted to the craft and the praise is certainly earned. Chino was a master potter and it is understandable why collectors admire her work so enthusiastically. She was certainly one of the Acoma potters who made particularly important contributions to the art of pottery making in the period following World War II. Chino was making pottery as early as the 1920s.

Chino is considered one of the significant ceramicists at Acoma and was the matriarch of a very talented family of potters. She is best known for her black-on-white pottery.  Along with Lucy Lewis and Sarah Garcia she led the revival of the ancient pottery forms of the ancestral pueblo potters. She was one of the women who was inspirational in the movement to revive the use of ancient Mimbres designs on contemporary Acoma pottery.