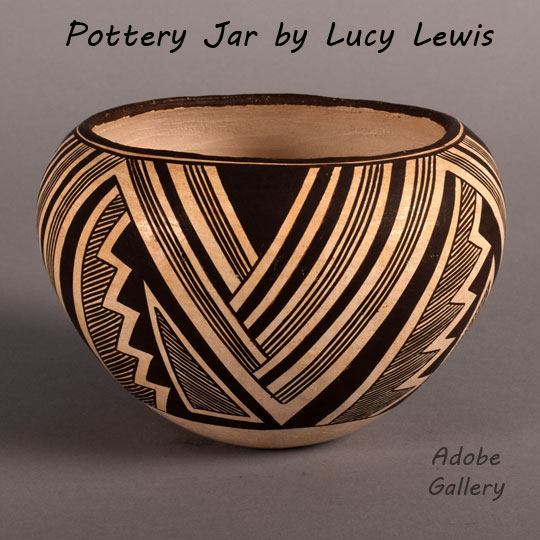 This Acoma Pueblo pottery jar by Lucy Lewis presents a beautiful layout of exquisitely placed black-on-white lines of varying width, black outlined white lightning, and triangles filled with fine lines.   The jar was first covered in white slip from rim to underside and then designed with these bold black lines and triangles.  Such a design could only have been executed by an accomplished potter such as Lucy Lewis.

Lucy Martin Lewis had a long and illustrious life.  She was born around 1898 and passed away on March 12, 1992, at a supposed age of 93. Her year of birth is not known. She spent nearly all her life atop the high mesa of Acoma Pueblo, making pottery since the age of 7. She is largely responsible for the revival of Mimbres black-on-white pottery designs which are more than 1,000 years old. She was famous, as well, for her exquisite polychrome designs and her fine-line and lightning designs. This jar is signed Lucy M. Lewis Acoma N.M. on the white underside.

Lucy continued throughout her life to make pottery in the traditional way; digging and preparing clay, grinding potsherds for temper; coiling the clay into a vessel shape, making her paints from plant and mineral elements, and firing the finished vessels in an open outdoor handmade kiln.  This jar was certainly made in that fashion.  Judging by the quality of the work on this jar, it is estimated to date to the mid-twentieth century.

Travelers to New Mexico who have been to Acoma Pueblo are familiar with the original village atop the mesa known today as Sky City.  It was on top of that mesa that Lucy Martin Lewis was born, and it was there that she grew up without the benefit of going to school.  It was there also that she was struck by lightning in the 1960s. There was little hope that she would ever work again, but with perseverance she regained her muscle strength and went on to become one of the most recognized potters at Acoma Pueblo.

Famous photographer Laura Gilpin took Lucy Lewis to Santa Fe in 1958 to meet Dr. Kenneth Chapman, then the director of the New Mexico Museum.  Chapman had been an influence on Maria and Julian Martinez in the 1920s. Now he would influence Lucy Lewis by showing her examples of ancient pottery that were her heritage.  Lewis adopted many of these designs and used them throughout her life.

Provenance: this Acoma Pueblo Black-on-white Pottery Jar by Lucy Lewis is from the collection of a client from Georgia