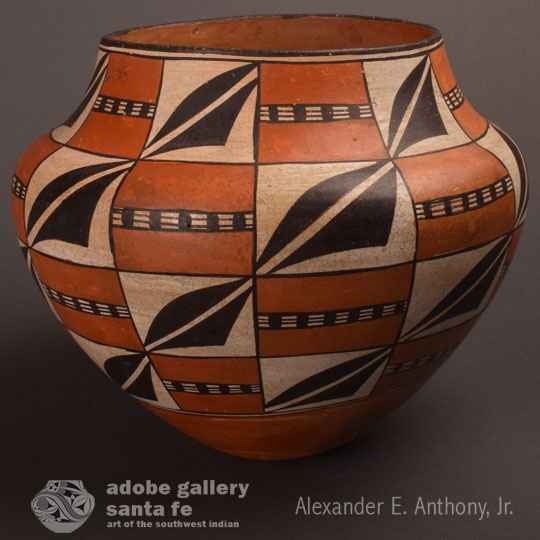 This Acoma Pueblo historic pottery jar from circa 1930s has a bold checkerboard design of orange squares adjacent to white squares, each of which contains a simple design.  The orange squares have a dark brown band across their center with brown lines over white background. The white squares each contain a diagonal dark brown split arc. The checkerboard design goes from the rim down to the orange underbody.

A nearly identical jar is illustrated in Dillingham’s book on Acoma and Laguna pottery (see book reference below) for which he states a date of 1920-40.  This was a period when potters at Acoma and Laguna Pueblos gathered daily at the train stop at Laguna to sell their wares to the tourists passing through on the Chicago to Los Angeles and return trip. There was a train stop at Laguna Pueblo and it was a venue for cash for the potters. There were also train stops at three Acoma villages as early as 1928 and additional venues for potters to sell their wares.  It was about that time that potters started adding Acoma, N.M or Laguna N.M. fired on to the underside of pottery. It was later that personal names were added. [Dillingham 1992:164]

The jar was constructed of traditional Acoma clay with ground up potsherds as temper.  The walls are thin and the jar rings like fine crystal.

Thanks to Dr. Edward Lee Hewitt, director of the Museum of New Mexico and the School of American Research, the first event with the intent to reward artists and encourage them to improve their wares was held in 1922.  It was the Southwest Indian Fair and the predecessor to the Santa Fe Indian Market. The Gallup (N.M.) Inter-tribal Indian Ceremonial was also inaugurated in 1922 primarily with emphasis on the Navajo culture. Still another venue was started to reward artists with prizes for the finest art.  That was the New Mexico State Fair in 1938. All of these events did have a tremendous effect on Native artists striving to make the best work. It is because of these venues that pueblo pottery production is of the highest quality today.

Provenance: from the extensive collection of a client from Colorado