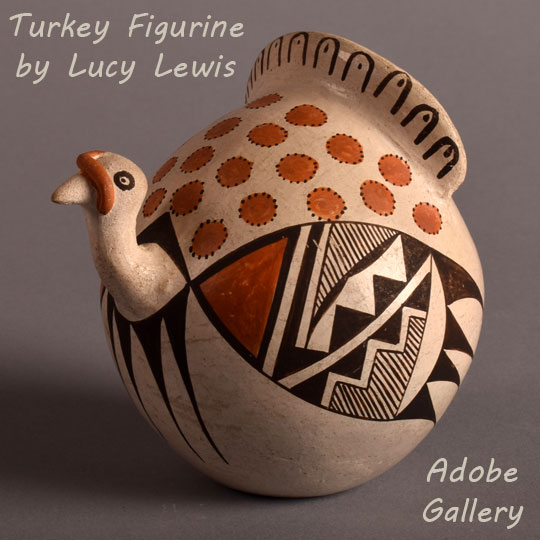 Turkey figurines seem to be a popular art form for potters of New Mexico pueblos, perhaps because there is a large population of wild turkeys in the state.  Most potters who make figurines include turkeys in their repertoire.  This one is signed Lucy M. Lewis Acoma.  Earlier, there was a time when she did not sign her pottery, identifying them only by their place of origin: Acoma, N. M. or Sky City, N. M. At that time, Lucy sold her pots from a roadside stand on Route 66.

This turkey is an earlier one by Lewis, early enough that she was painting exquisitely.  Look at the red circles on the back of the turkey and notice that each circle is outlined in small black dots.  Notice also the precision with which the parallel black lines were executed.  This is an exceptional figurine.

Travelers to New Mexico who have been to Acoma Pueblo are familiar with the original village atop the mesa known today as Sky City.  It was on top of that mesa in 1898 that Lucy Martin Lewis was born and it was there that she grew up without the benefit of going to school.  It was there also that she was struck by lightning in the 1960s.  There was little hope that she would ever work again, but with perseverance she regained her muscle strength and went on to become one of the most recognized potters at Acoma Pueblo.

Provenance: this Acoma Pueblo Polychrome Pottery Turkey Figurine by Lucy Lewis is from a private collection