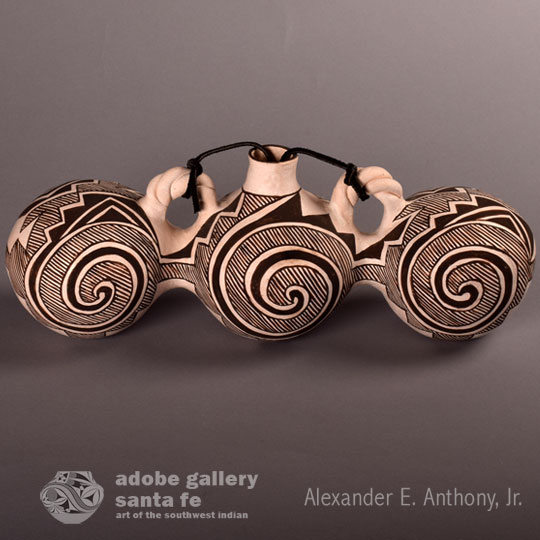 Acoma Pueblo artist Juana Leno is responsible for reintroducing this prehistoric design triple canteen into modern pottery.  This one probably dates from the early 1990s as that is when she seemed to make most of this style canteen. The Tularosa design goes back a millennium.

Juana Leno—formerly Juana Louis Vallo—was one of the finest potters of the 20th century at Acoma Pueblo. She quietly worked every day producing extraordinary pottery without seeking acclaim. She was a wonderful woman and very modest about her talent to produce such fine pieces.

Juana Leno (1917-2000) Syo-ee-mee (Turquoise) may not have achieved the fame she was due, but it was not because of the lack of quality in her work, but because she chose to remain quietly at home and not seek fame.

Provenance: from the extensive collection of pottery from a resident of Washington