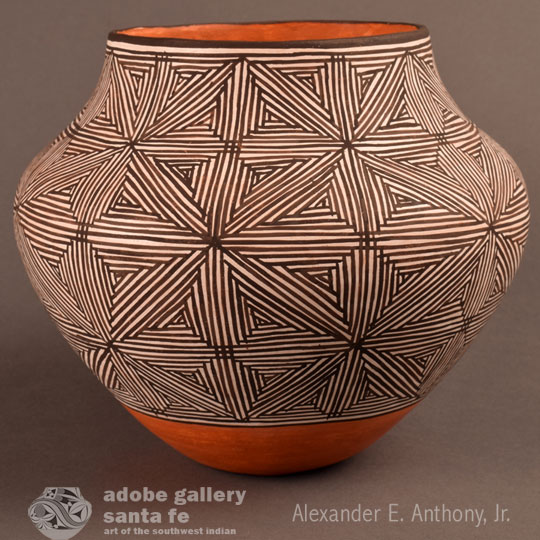 Though it’s not as widely known as that of Lucy Lewis, the pottery made by Juana Leno is some of the finest ever produced at Acoma Pueblo.  This piece is completed in a style which both of these potters explored frequently: a fine line design, with rows of parallel lines intersecting with one another.  Their intersections form diamonds and kite-shaped four-sided figures. These figures arrange themselves around center points, forming images that could be flowers or stars.  One should note that an enormous amount of skill is required to successfully execute such a complex design. Leno handled this one beautifully.

As is typical of jars like this, a red painted band circles the top of the interior.  The bottom, which is signed “Leno, Acoma N.M.”, is also red. Its shape is similar to that of a made-for-use “tinaja” (or “water jar”) but smaller.  Leno and Lewis produced many jars in this style, and we are always happy to see that collectors continue to appreciate their fine work.

Juana Leno (1917-2000) Syo-ee-mee (Turquoise)—formerly Juana Louis Vallo—was one of the finest potters of the 20th century at Acoma Pueblo. She quietly worked every day producing extraordinary pottery without seeking acclaim. She was a wonderful woman and very modest about her talent to produce such fine pieces. She may not have achieved the fame she was due, but it was not because of the lack of quality in her work, but because she chose to remain quietly at home and not seek fame.

For years, I drove out to her home at Acomita and purchased pottery from her, and I was always charmed by how graceful she was and what beautiful work she produced. She was one of the few Acoma potters from whom I purchased pottery regularly.