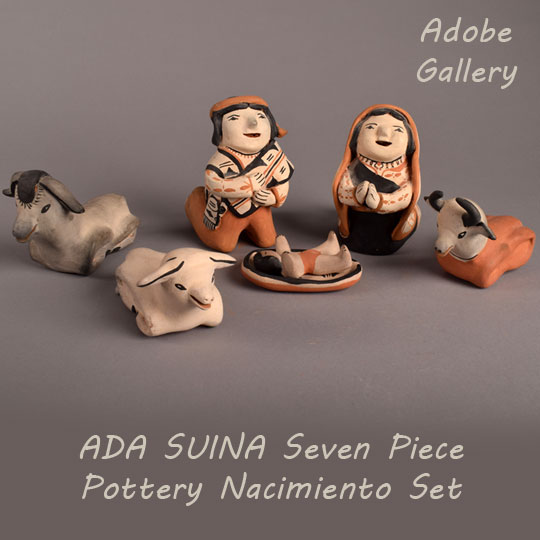 This pottery nacimiento by Ada Suina of Cochiti Pueblo features a very happy Mary and Joseph and even a smiling Baby Jesus.  Mary is kneeling, has her hands clasped together, and wears a beautifully decorated shawl.  Joseph, too, is kneeling.  He wears a fancy vest, has a blanket draped over one shoulder, and has a medicine pouch hanging off his right side.  Baby Jesus rests in a cradle that is a separate piece.  There is a cow, a donkey and a sheep sharing the area with the Holy family.

According to Ada, she made her first nacimiento in 1977.  She immediately achieved fame with her nacimientos.  The Museum of Albuquerque, which opened in 1979, promptly purchased a nacimiento set from her for its permanent collection.  Ada was included in the 1979 book Nacimientos by Guy and Doris Monthan.

This Cochiti Pueblo nacimiento is an older set, having been made before 1988.  The exact date is not known.  We sold this to the current owner in 1989 and now have it back to sell again.  It is signed with the name of the potter and is in original condition.