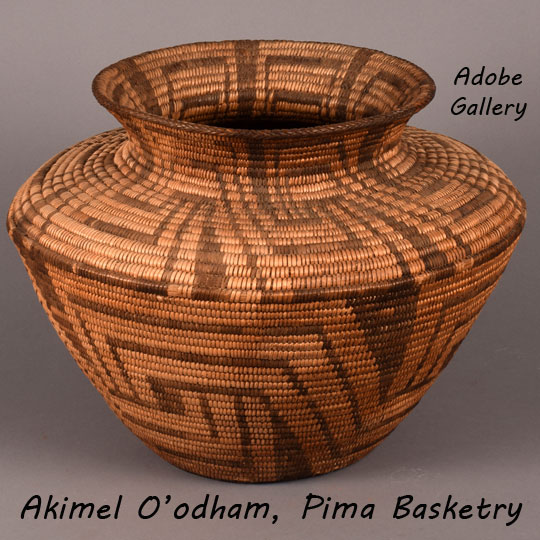 Most Akimel O’odham (Pima) basketry in collections are shallow bowls of the style used on a regular basis in the maker’s household.  They have been called wheat baskets, squaw baskets, or trays.  Olla shape baskets, like the one here, were regularly used in the maker’s household, but rarely sold.  Ones, like this one, with angular shoulders and flaring rims are the most dramatic.  They generally have designs that cover the olla from base to rim.  Such ollas were made for use in the weaver’s home for storage.  The reason they are scarcer in collections is that they were needed in the home, whereas bowls were in larger quantities and therefore available for sale.

Magnificent ollas and bowls were replaced in the 1920s to 1940s by small basketry items aimed at the tourist market.  Traditional bowls and ollas were in demand in the home, so they were guarded and few were sold during those years.

The design is a meandering group of lines meeting, diverging, and crossing each other.  The design is spread out on the lower body and gets tighter on the shoulder and neck.

Provenance: this Akimel O'odham, Pima Basketry OLLA is from the collection of a client from Arizona, who purchased it from a Texas dealer in 1995.  The Texas dealer acquired it after it was deaccessioned by a Colorado museum.

Reference: Southwestern Indian Baskets - Their History and Their Makers by Andrew Hunter Whiteford