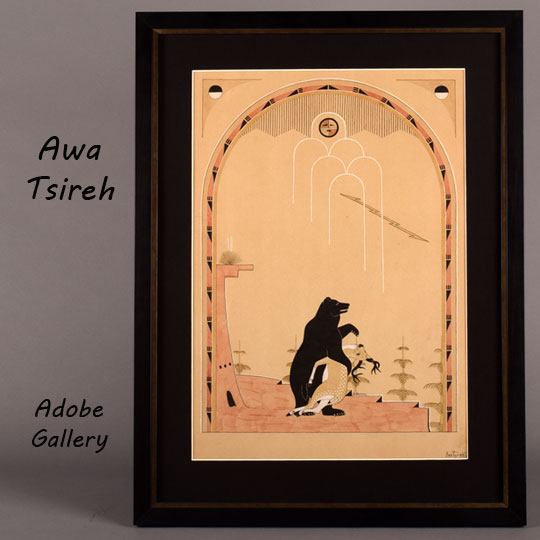 This exceptional original painting was created by Alfonso Roybal, a San Ildefonso Pueblo painter who is most often referred to by his Tewa name: Awa Tsireh.  In this piece, a bear cradles a deer in its right arm. The bear looks up and raises its left paw.  Awa Tsireh’s animals are always excellent; what’s most impressive about this piece is the way that Awa Tsireh managed to depict a potentially challenging scene in such a gentle and appealing manner. He used wispy, translucent watercolors in earthy tones for this image—an excellent decision, as these colors elevate the mood beautifully.

The animals’ interaction is framed within an elaborate environment, which uses both natural elements and a variety of symbolic designs.  Down below, we see trees, a jagged cliff’s edge, and a portion of a tall structure.  A patterned rainbow curves around and above this small corner of the physical world, containing at its peak a sun face, rain clouds, lightning, and vertical rain lines.  These traditional design elements work together here, creating a beautifully stylized storm.  Just outside the rainbow’s rounded corners, curved triangular designs containing split circles appear, balancing out the painting’s rectangular shape and the rainbow’s rounded form.  Every design element, every color choice, and every brush stroke in this image feels elegant and intentional, and the end result is another incredible example of Awa Tsireh’s work.

The painting is signed Awa Tsireh in lower right.  It is framed beautifully, under a black mat, in a black frame with a gold interior band.  UV protective museum glass was used.

Alfonso Roybal (1898-1955) Awa Tsireh (Cat-tail Bird) was many things to his pueblo of San Ildefonso: he was a farmer, pottery painter, museum employee, painter, and silversmith.  He had many trades and skills but is primarily remembered today as a painter and metalworker. He began painting in 1917, which makes him among the very first pueblo painters. His artworks were featured in “Awa Tsireh: Pueblo Painter and Metalsmith,” a comprehensive exhibition at Phoenix's Heard Museum. His works are included in many major public and private collections, including that of the Smithsonian Institution’s National Museum of the American Indian.

Awa Tsireh was recognized beyond his native world as an outstanding artist. His watercolors were sent by Alice Corbin Henderson to the Arts Club of Chicago for a special exhibit in 1920. His paintings appeared in early exhibits in Santa Fe, and he was among the several artists to receive prizes at the first Santa Fe Indian Market. In 1925, the Chicago papers were generous in their acclaim for his exhibit in the Newberry Library. The Exposition of Indian Tribal Arts in New York in 1931 included Awa Tsireh paintings. He is generally regarded as one of the best pueblo painters, and his works continue to increase in value as his historical significance becomes more widely recognized.

Provenance: this Original Pueblo Painting of Bear and Deer by Awa Tsireh is from a private collection