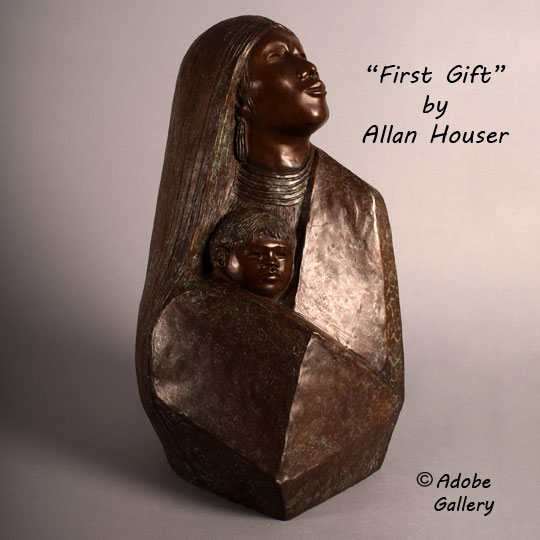 "First Gift" is a bronze sculpture by Allan Houser, the Chiricahua Apache sculptor and painter who is generally regarded as one of the most influential Native American artists. It is a depiction of a Native woman holding her young son. The woman looks up and to her left, which invites interaction between her face and the light in the room. She wears an expression of serenity on her face, with a contented grin beginning to appear. Her young son stares straight ahead, cradled within his mother's robe. Their faces and hair are depicted in careful, sensitive detail, as is her jewelry. Precision and detail are impressive, but what's more significant is the figures' character—these two appealing figures excel in that regard, which is not an unusual attribute for a Houser bronze.

Elsewhere, the piece shifts into more abstract territory. The woman's robe hangs from her shoulders not in a loose, rounded manner but as a nearly flat plane with two clear edges. This emerges from underneath her hair and travels along her shoulder before curving downward sharply, where it eventually disappears into the larger form down below, which similarly uses strong shapes with sharply defined edges instead of straightforward depiction. All of the elements work together perfectly to form a sculpture that is elegant, expressive, and undeniably beautiful. "First Gift" is a late-career masterpiece from one of the most important artists of the twentieth century.

The bronze is signed Allan Houser Haozous, numbered 9/20, and dated 94.  The significance that it was completed in 1994 is that was the final year of Houser's life. This piece is number 9 of an edition of 20.

Allan Houser (1914-1994) Haozous was a Chiricahua Apache painter, sculptor, teacher, and illustrator whose works are displayed in major museum collections around the world. Houser was born in 1914 near Fort Sill, Oklahoma, and passed away in 1994. A Warm Springs Chiricahua Apache, he was the great nephew of the famous Chiricahua warrior Geronimo. At the age of 20 he went to study at the Indian School in Santa Fe under the tutelage of Dorothy Dunn. While he excelled at The Studio, he found it confining and constricting creatively. Houser went on to become successful as a painter, sculptor, and educator.

Today, he is recognized as one of the most successful and accomplished Indian artists of the 20th century. His works are included in the permanent collections of the Smithsonian Museum of American Art, the National Museum of the American Indian, and many other prestigious institutions. His many accomplishments include receiving a Guggenheim fellowship and being the first Native American to receive the National Medal of Arts. Through his sculptures, his paintings, and his efforts as an educator, Houser's voice remains one of the strongest in the world of Native American art.

Provenance: this Allan Houser Bronze titled "First Gift" is from a private Arizona collection, purchased from a dealer who obtained it through the Allan Houser foundation