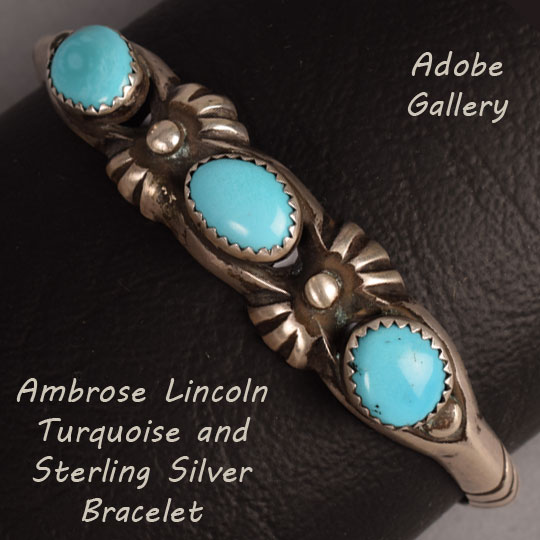 Three exquisite sky-blue turquoise gemstones were set in handmade sawtooth bezels and placed by Ambrose Lincoln on a cast cuff adorned with silver drops. Lincoln, who is not to be confused with Ambrose Roanhorse, was the artisan who fashioned this incredible three-stone cast bracelet.

There has been some confusion about the relationship between Lincoln and Roanhorse. The story is interesting as it illustrates how difficult it can be to attribute jewelry to a single maker, even if it is signed.

The story begins with John Adair’s 1940 book Navajo and Pueblo Silversmiths. In Adair’s book, he listed them as two separate artists. They were again listed as two different silversmiths in Mark Bahti’s 1980 Collecting Southwest Native American Jewelry. However, after that, the confusion began when Barton Wright designated the two as the same individual in Hallmarks of the Southwest.

The confusion was probably a result of the fact they had the same first name and that both were at the Wingate Vocational High School—Lincoln as a student and Roanhorse as a teacher— only a year later. Both taught at the same institution—the Santa Fe Indian School, Lincoln three years after Roanhorse left.

This amazing bracelet was made by the younger of the two. Ambrose Lincoln was born in 1917. He worked for both C.G. Wallace and Charles Kelsey in the Zuni Gallup area and died in 1989. He is known for using high quality turquoise gemstones on finely cast pieces. This bracelet is a fine example of the work of Ambrose Lincoln. It is stamped with his hallmark and sterling. It dates from the mid twentieth century.

Condition: the bracelet is in excellent condition.

Provenance: this Ambrose Lincoln Three Stone Turquoise and Cast Sterling Silver Bracelet is from a collection in Colorado