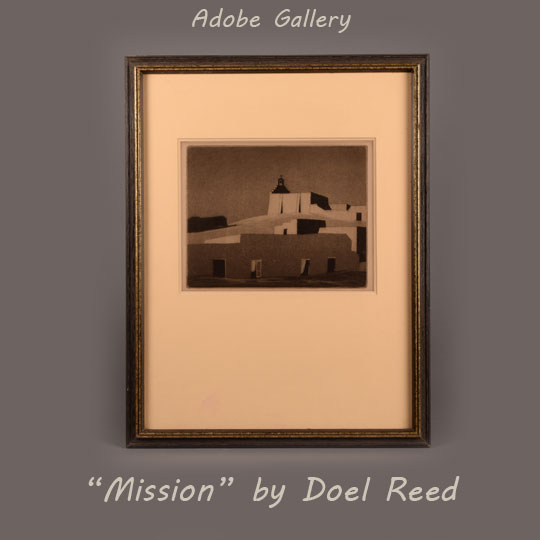 This aquatint etching by Western artist Doel Reed is titled “Mission”.  It’s a gentle, serene image featuring a church.  The church is located at the top of an otherwise empty hill.  A wall with a stair step design rises from one side.  At its peak, a bell hangs from an archway and a cross rises into the sky.  In the foreground, other structures appear, with sharp right angles and well-defined edges forming attractive patterns.

While the composition is attractive, Reed’s skill is most apparent in his work with light and shadow.  A strong black tone forms the walls that are untouched by sunlight, and the paper’s light gray tone peeks through to form those that stand in the sun’s path.  The building in the foreground, which stands perpendicular to the others, displays a tone that falls somewhere in between the black and light gray.  “Mission” is an attractive piece from a skilled and influential artist.

The etching is framed under a wide cream-colored mat in a carved wood frame.  There is no visible signature or numbering—they likely appear under the matting—but etching has not been inspected out of the frame, so we cannot say with certainty.

Doel Reed (1894-1985) was a painter and printmaker who was born in Indiana.  Reed received his formal education from the Art Academy of Cincinnati.  He also served in the military, and was one of the earliest art professors at Oklahoma State University.  Reed made his way to New Mexico in 1959.  A look through his works and list of accomplishments reveals an incredibly versatile artist whose fame and success were well deserved.  He is internationally renowned, and his works are included in prominent museum collections around the world.  Reed passed away in 1985 in Taos, New Mexico.

Provenance: this Aquatint Etching "Mission" by Doel Reed is from the collection of a client from Oklahoma

Recommended Reading: Peggy and Harold Samuels, The Illustrated Biographical Encyclopedia of Artists of the American West