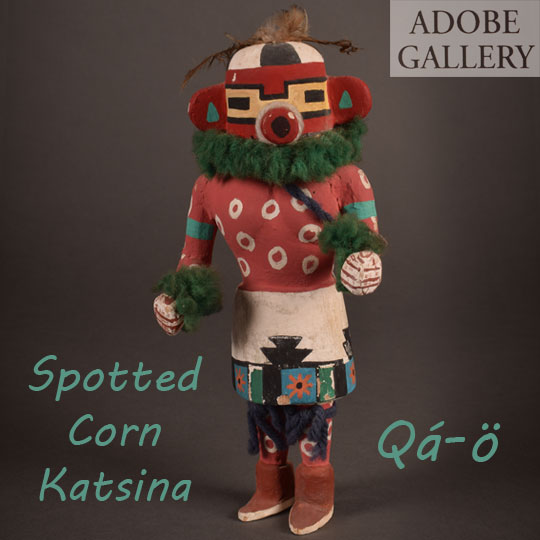 There appear to be a variety of Avanchoya, or Spotted Corn, Katsinas as there are variations in the mouth, face design and item or item on top of the mask.  According to our consultant, this is the older version, identified by the feathers pointing in four directions on top of the head.

The circles on the body is where the “spotted corn” name was derived.  The mouth is tubular and the ears are flat and extended. The doll wears a traditional Hopi embroidered kilt and red moccasins.  He has a fox tail suspended from his waist on the back. The carving was executed very well. The body of the doll is that of a young man, tight and muscular.

According to Barton Wright, “Avachhoya or Qá-ö is the Spotted Corn Kachina who appears in the Pamuya in the regular Kachina dances.  Generally this Corn Kachina dances with such a lively step that only the boys or young men will take the part. They do not sing and are always accompanied by a drummer and chorus, usually Koyemsi.  Sometimes two of these kachinas will dance on the plaza by the side of the Niman Kachinas. Holding nothing in their hands, they make motions and signs describing such figures as clouds or corn stalks or whatever is being sung about at the time.  Probably no other kachina name has quite so many different forms grouped together. It is apparently a generic term, at least nowadays, that covers a multitude of dancers whose function is to aid in the production of corn. The old Hopi style of Avachhoya was a figure with rings painted upon the body and face and four crossed feathers upon the head.  This is probably the closest approach to the written descriptions of Avachhoya, and yet it is just as close to the Laguna Swaying Man.  It is a hybrid figure that any Hopi will call Avachhoya—one of the Corn Dancers.” Wright, 1973:171

Condition: quite good condition with some paint abrasions

Provenance: this Hopi Pueblo Old Style Avatshoya or Avachhoya or Qá-ö Spotted Corn Katsina Doll is from the collection of a family from Oklahoma