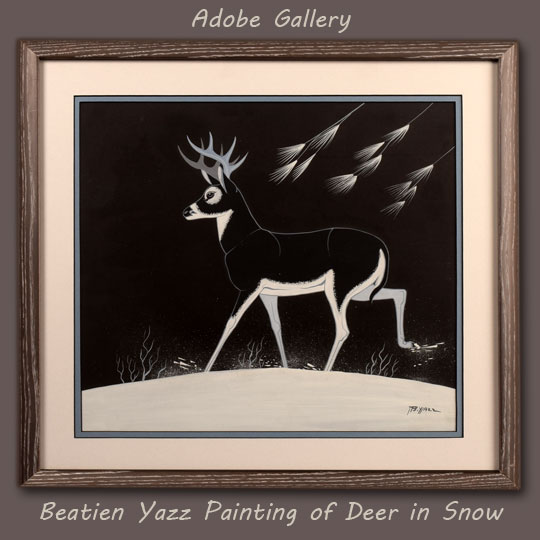 This original painting of a deer in snow was created by Diné artist Beatien Yazz.  With its profile view of an animal and simple but appealing environment, it could be called a classic Yazz image.  He made many images like this, but he always managed to create variety in the coloration and the small details.

Here, we see a deer walking through a few inches of snow.  Its visible eye is wide and expressive, and its antlers are portrayed in a stylish manner.  One hind leg kicks backward, the others are planted firmly in the snow.  A trio of tree branches reaches in toward the deer from the upper right corner. Light blue and gray appear in a few small areas, but most of the image is composed only of white paint on bold black paper.  Yazz’s simple palette works perfectly, as the painting’s strength lies in its contrasting black and white tones.

The painting is signed B. Yazz in the lower right.  It is framed beautifully, under two layers of matting in white and blue in a thin, rounded wood frame.

Beatien Yazz (1928-2012) was a Diné artist.  He is known for his beautiful, sensitive portrayals of Diné people and the wildlife of the Navajo Nation.  He is reported to have been an animal lover, which makes sense given his prolific creation of animal-centric images.  With money he earned selling his paintings, he purchased a horse and named it Sliver [sic].  Yazz had listened to “The Lone Ranger” on the radio and named his beloved animal after the titular character’s horse Silver, but misspelled the name when writing it out.  He also had a small dog and a chicken named McNugget.  Yazz’ animal images remain very popular among his many collectors.

Provenance: this Beatien Yazz Original Painting of Deer in Snow is from the large collection of a Santa Fe resident, who purchased the piece directly from the artist. WIDE RUINS Memories from a Navajo Trading Post [SOLD]
by

Spirit in the Stone: A Handbook of Southwest Indian Animal Carvings and Beliefs (Sold)
by Mark Bahti