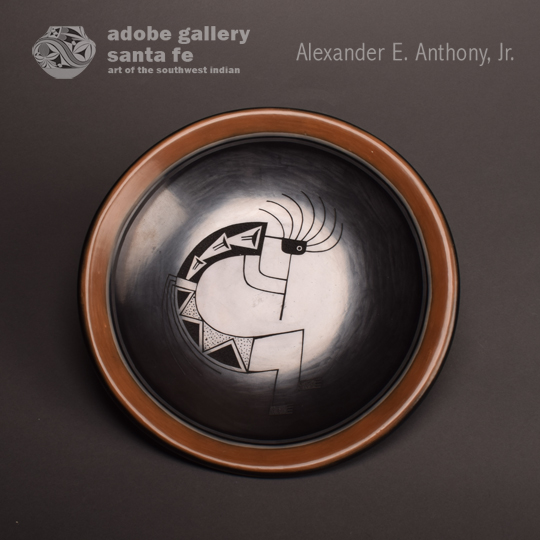 Tony Da is best known for his elaborate pottery creations with turquoise, silver, hieshe and other embellishments but there was a period when he created beautiful understated pottery. This black shallow bowl with a sienna rim and a pair of matte framing lines is a most elegant piece of art.  The contrast between the highly-polished black center section, softened by a sienna edge, was an ingenious idea of his.  For the center of the bowl, Tony inscribed a Mimbres-style Flute Player, known as Kokopelli.

This bowl was probably made in the late 1960s, a period after Tony experimented with smaller jars and bowls with sgraffito designs.  The original price displayed on a merchant’s tag on the bowl is $195, another indication of an early date when it was made.  There is a similar black and sienna plate with a sgraffito bison in the Dennis and Janis Lyon collection which they purchased in 1970, an indication that Tony was producing this style at that time.

Tony was destined to become one of the finest artists of the 20th century. His grandparents,  Maria and Julian Martinez, and his father, Popovi Da, were skilled artists. Tony was a painter from early in life, and was winning awards for his paintings. A change occurred when he moved in with his grandmother in 1966. She taught him the techniques of pottery making and he learned very well. Within three years, Maria said he had nothing else to learn from her.  One would expect Tony to produce pottery in the traditional style taught him by Maria but he was too creative to do so.  He followed his own ideas and became a world-famous potter by doing so.

Tony only had a short career as a potter before his devastating motorcycle accident in 1982, an accident that ended his pottery career., although he survived.  In those few years, he created many masterpieces and received world recognition.  Very few artists can claim such fame in such a short time.

This black and sienna pictorial bowl well illustrates how great an artist he was and to what extent he could produce a masterpiece of simple elegance.

Condition: this Black and Sienna Kokopelli Pictorial Shallow Bowl is in excellent condition

Provenance: from the collection of a family from St. Joseph, Missouri

Recommended Reading: The Life and Art of Tony Da by Charles S. King

What is a Kokopelli? a fertility deity, usually depicted as a humpbacked flute player (often with feathers or antenna-like protrusions on his head), who has been venerated by some Native American cultures in the Southwestern United States. Like most fertility deities, Kokopelli presides over both childbirth and agriculture. He is also a trickster god and represents the spirit of music.  - Wikipedia