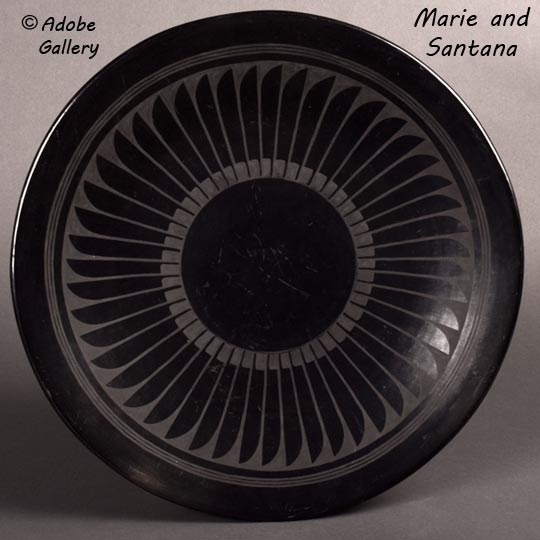 Maria’s husband Julian Martinez was a janitor at the Museum of New Mexico for a dozen or so years early in the museum’s history.  It was there that Julian most likely saw the Mimbres bowl in the museum’s collection that was decorated with eagle feathers.  Julian may have been working as a janitor but his mind was working as an artist.

This is an enormous San Ildefonso Pueblo pottery plate by Maria Martinez, measuring over 14 inches in diameter. There are 48 feathers and three encircling lines near the rim. Each circle was painted freehand using a yucca leaf paint brush.  The same process was used for outlining the feathers.  It takes a steady hand to paint in that fashion and Santana was very good at doing so.

Condition: this Very Large Black-on-black San Ildefonso Pueblo Pottery Plate by Marie and Santana is structurally in excellent condition but there are scratches in the center of the plate and some abrasions near the outer edge.

Provenance: from the estate of a client in Louisiana who purchased it from Adobe Gallery in 1998.

Reference and Recommended Reading: The Legacy of Maria Poveka Martinez by Richard Spivey