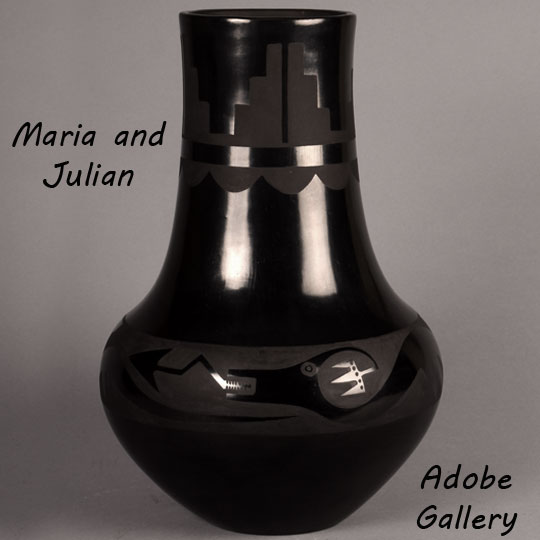 This exquisite black-on-black jar was created by San Ildefonso Pueblo artists Maria and Julian Martinez.  It is signed “Marie”, which identifies the piece as having been created between 1923 and 1925. Earlier works are unsigned, and later works’ signatures usually included Julian’s name or that of one of Maria’s other collaborators.  When viewing this remarkable piece, it is wise to consider its age—it’s nearly a century old, but an unfamiliar viewer would never guess that.  The jar has a wonderfully fresh look, despite being made long ago using traditional methods and materials. This is one of many reasons why black-on-black pottery is so special.

Maria’s work with this piece resulted in an undeniably beautiful vessel.  The lower section takes on a traditional form, but it’s a perfect example of this particular shape.  Its curved sides move gracefully and consistently up from the base, turning back inward to form a soft shoulder.  It’s here that the piece takes a rare turn upward, with a long, tall neck extending about six inches up from the spot where a typical piece would end.

Julian’s contributions—painted design bands around the rim and the jar’s widest point—suit the vessel perfectly.  The uppermost design uses interlocking kiva step patterns.  Just below it, a band of rain clouds appears.  Together they occupy about half of the tall neck, leaving the remainder unpainted to display the vessel’s exceptional polish.  Down below, another design band appears, circling the shoulder and reaching down to just below the jar’s widest point.  This band features a spirited depiction of the Avanyu water serpent and multiple clusters of rain clouds.  Julian’s efforts match the quality of Maria’s in every way, which makes this piece an outstanding example of their collaborative work.  This is an impeccable example of San Ildefonso blackware.

The bottom of the jar is signed Marie.

Maria Montoya Poveka Martinez (1887-1980) Pond Lily of San Ildefonso Pueblo is probably the most famous of all pueblo potters. She and her husband, Julián Martinez (1885-1943) Pocano, discovered in 1918 how to produce the now-famous black-on-black pottery, and they spent the remainder of their careers perfecting and producing it for museums and collectors worldwide.  Julian unfortunately passed away at a young age in 1943 at San Ildefonso. Maria and Julian’s son Popovi Da (1922-1971) began collaborating with Maria on her pottery in 1956, following a period when daughter-in-law Santana had been assisting.  Popovi and his mom worked together until his death in 1971. Maria’s sister, Clara, spent most of her adult life polishing pottery for Maria.  Clara was deaf, so Maria supported her with this work.  Maria’s grandson Tony Da also rose to prominence as a potter and painter.  Maria passed away in 1980, leaving behind a large body of work and a significant legacy.

Condition: Excellent condition.  A few abrasions were treated by a professional restoration artist and are now invisible.

Provenance: this Black-on-Black Jar with Tall Neck by Maria and Julian is from a private collection