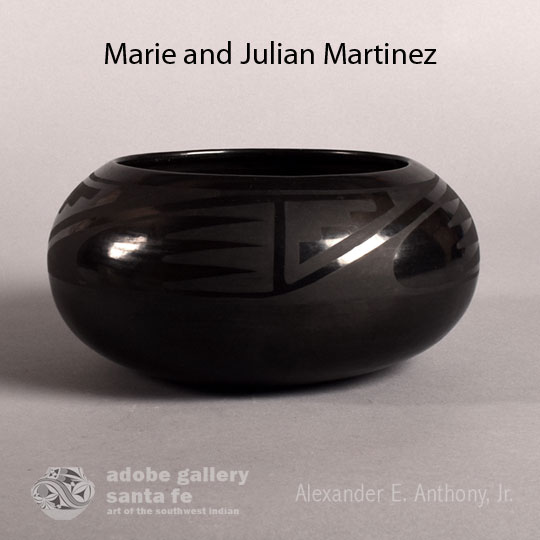 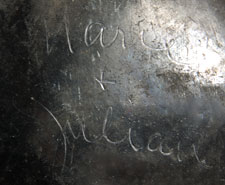 This black pottery jar was made by the famous San Ildefonso Pueblo potter Maria Martinez and the design painted by her famous artist husband, Julian.  The matte design could be interpreted as the design itself or as a frame outlining the design in the polished area over which it was applied. The design band encircles the jar on the upper half.  The lower half and underside are stone polished. This jar is signed on the underside: Marie & Julian is embedded into the clay.

Maria Poveka Martinez (1887-1980) and Julian Martinez (1885-1943) worked together producing pottery from the early 1900s—she making the beautiful Tewa shape vessels and he painting beautiful designs in traditional polychrome style early in their careers and then producing black pottery after the 1920s.

Her exquisite vessels with beautiful polished surfaces were perfect canvases for the artistic talent of Julian.  Maria started co-signing Julian's signature around 1925 so it is known this jar was made between 1925 and 1943, most likely in the mid- to late-1930s.  There are questions by some as to whether to call this vessel shape a jar or a bowl. We classify this as a jar because of the incurving walls where we would call it a bowl if the walls flared outward. Jars are generally not stone-polished on the interior whereas bowls are generally stone-polished.

Because Maria was considered the best potter at San Ildefonso, she was selected to experiment on reproducing the prehistoric wares being excavated.  She and Julian worked diligently for several years to recreate the earlier pottery and Julian painted designs in the traditional polychrome style. It was not until around 1912, that they became interested in experimenting with the blackware of previous periods.  It was another 10 years before they achieved satisfactory results.

Condition: structurally in excellent condition.  There are minor abrasions to the clay as would be expected in a jar of this age but they are mostly on the underside and not visible.

Provenance: this San Ildefonso Pueblo Black-on-black Pottery Jar by Marie and Julian Martinez is from the collection of a family from Missouri.