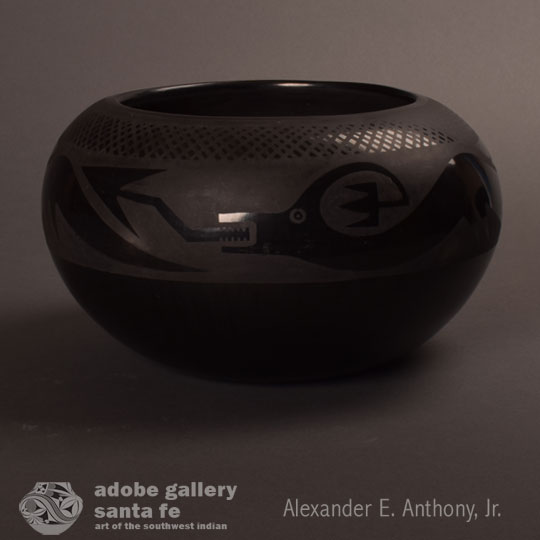 This is a major small storage jar by Rosalie and Joe Aguilar of San Ildefonso Pueblo.  It is beautifully rounded from the base to the rim. The stone polishing is exceptional and the design, painted by Joe, was well executed.  The extraordinary cross hatching just below the rim sets this jar above most others.The jar is signed Rosalie + Joe on the underside.

Although they may have been prolific potters, they were producing at a time before pueblo pottery became a serious collectible and most likely most of the wares they sold before the 1940s have long ago been discarded and destroyed.  Hopefully, a number of theirs are in museum collections. This is only the third one of their works we have had in the history of the gallery, so I surmise that there are not many available.

Rosalie Simbola Aguilar (1898-1947) was originally from Picuris Pueblo.  In 1922, at the age of 24, she married Joe Aguilar (1898-1965) of San Ildefonso Pueblo and they settled there.  The couple had eleven children over a period of twenty-four years, yet, Rosalie and Joe found time to produce beautiful pottery in the San Ildefonso style. Rosalie, in addition to producing Black-on-black pottery also made carved designs.  She and Rose Gonzales were the only two potters at the pueblo to produce carved wares and both were imports from other pueblos.

Joe had painted pottery for his mother, Suzanna Martinez Aguilar, and was an exceptional painter.  Kenneth Chapman listed Joe among 15 artists at San Ildefonso who painted pottery before 1940. Joe’s son, Alfred Aguilar, said that his dad formed pots as well as painted them.  If so, he would have been among the earliest males to do so.

Jonathan Batkin included Rosalie in his article Three Great Potters of San Ildefonso, published in American Indian Art Magazine in 1991.  That gives one an idea of just how great she and her husband were at making contemporary pottery.

Provenance:  From the collection of a client to whom we sold it in 2015. Previously from the estate of the former Chief Sunny Skies Trading Post, located on the main street in Carlsbad, New Mexico, for over 40 years and which was closed in 1977.  Chief Sunny Skies, whose other name was Clyde Hunt, was from Acoma Pueblo. He was the son of Chief Big Snake (Edward Hunt) also of Acoma Pueblo. This collection had remained in the family since the trading post was closed in 1977.