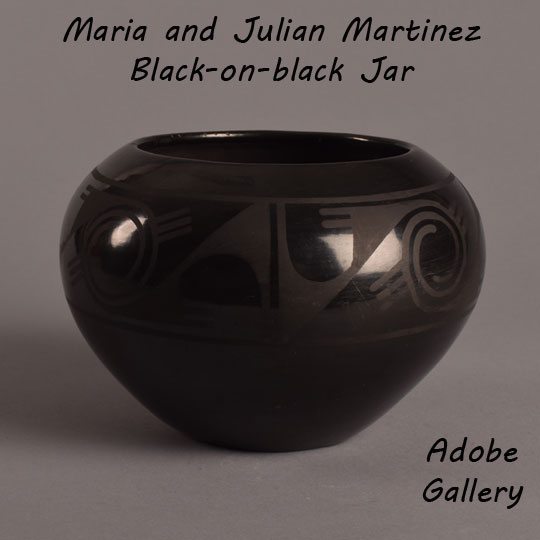 Maria Martinez is known to have had help from her sisters when making pottery at San Ildefonso Pueblo.  It is generally agreed that her youngest sister, Clara, polished many, if not most, of Maria’s pottery for her.  Desideria also helped Maria in various ways, and the male members helped gather and work the clay and prepare the outdoor firing kiln.  Pueblo pottery making is a cottage industry and is often worked by various members of the family. Maria had a very distinctive signature when writing her and Julian’s names and it varied little, if at all, during her long career.  This jar does not bear the handwriting of Maria. It does not mean that Maria did not make the jar and that Julian did not paint the design, it only means that another member of the family may have signed the jar with their names because perhaps Maria was occupied with making pottery or entertaining tourists.

The shape of the vessel and the design are typical of Maria and Julian’s work, only the signature is not. The design painted on the jar is one documented as having been painted by Julian on a number of occasions.  It is one of his earlier designs used prior to his painting feather and Avanyu designs many times in later works.

The signatures are embedded into the clay so it was applied while the jar was in process of being made and the clay was still damp.  There is no doubt in our minds that the artists were Maria and Julian Martinez.

Condition: good condition with only some slight abrasions which is expected of a jar of this vintage

Provenance: this Black-on-black Jar with Curvilinear Designs by Maria and Julian Martinez of San Ildefonso Pueblo is from a family collection from Missouri