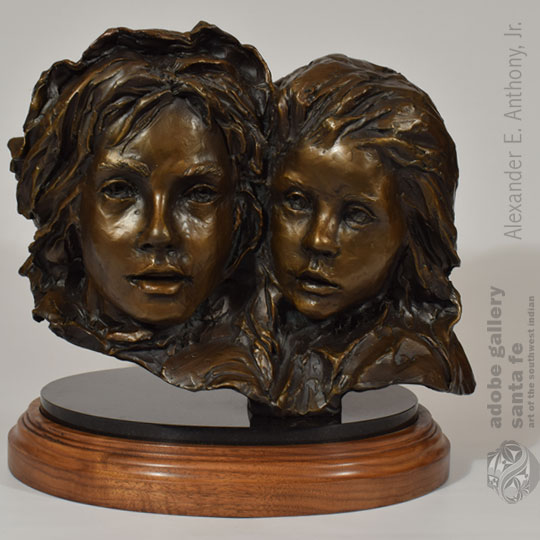 This gorgeous bronze sculpture is titled “Daughters.”  Glenna Goodacre’s subjects here are, as the title implies, two young girls who appear to be siblings.  Their faces, similarly composed but different in size, are clearly intended to be those of two sisters.  The faces themselves—their eyebrows and lips, most notably—are realistic and remarkably detailed. Goodacre’s work behind and around these faces is more expressive, with interesting textures that stray from the faces’ accurate representational qualities.  The girls’ wild and messy hair surrounds their faces on all sides, lending the sculpture a bit of their youthful energy. Goodacre’s portrayal of these two young women is delicate and thoughtful. “Daughters” is a sweet, sensitive piece; an excellent illustration of exactly why Glenna Goodacre is so highly regarded. Glenna Maxey Goodacre (1939-2020 ) was an American sculptor who was born in Lubbock, Texas and  resided in Santa Fe, New Mexico.  Goodacre studied at Colorado College and New York’s Art Students League, beginning as a painter before moving towards three-dimensional media.  She is best known for having designed the Vietnam Women’s Memorial in Washington D.C. and the obverse (or “heads” side) of the U.S. Sacagawea Silver Dollar.  In 2003, she completed Philadelphia’s Irish Memorial, a massive public sculpture made to commemorate the many lives lost in Ireland during the middle of the 19th century.  Her works are included in many notable public, private and municipal collections around the country.

Goodacre’s works have received many prestigious awards and honors, and the artist herself has received many accolades from both her original and adoptive states.  She was inducted into the West Texas Hall of Fame and named 2008’s “Notable New Mexican” by the Albuquerque Art and History Museum.  She received honorary doctorates from her alma mater and Texas Tech University.  Unfortunately, Goodacre suffered a major head injury in 2007. She recovered well and eventually returned to work, though not without complications.  Goodacre officially retired from sculpting in 2016. She is considered by many to be one of the best and most important sculptors of her era.

Condition: this Bronze Sculpture titled "Daughters" by Glenna Goodacre is in original condition

Provenance: from the collection of a Texas resident who purchased the piece from Nedra Matteucci Galleries in 2007.  The original certificate of authentication is included with the piece. Additional:  A copy of this book is included with the purchase of this bronze: Glenna Goodacre, SCULPTURE by Glenna Goodacre. In her own words, sculptor Glenna Goodacre describes the inspiration for, and creation of, her unforgettable bronze sculptures. From the timid beginning of a six-inch study of her daughter Jill, Goodacre went on to sculpt over 40 important portrait commissions including the standing figure of president Ronald W. Reagan at the National Cowboy Heritage Center and at the Regan Presidential Library. This book features photographs of her most high-profile pieces, but many little-known works are included as well. Her most popular monument is the Vietnam Women's Memorial on the National Mall. Her largest public installation is the Irish Memorial at Penn's Landing in Philadelphia. Goodacre's smallest work is the front of the Sacagawea golden U.S. Dollar, first minted in 2000. Previously unpublished studies from the design process for the coin are also represented. A photographic survey of the artist's engaging sculptures, along with snapshots and anecdotes, covers the wide scope of her colorful career.