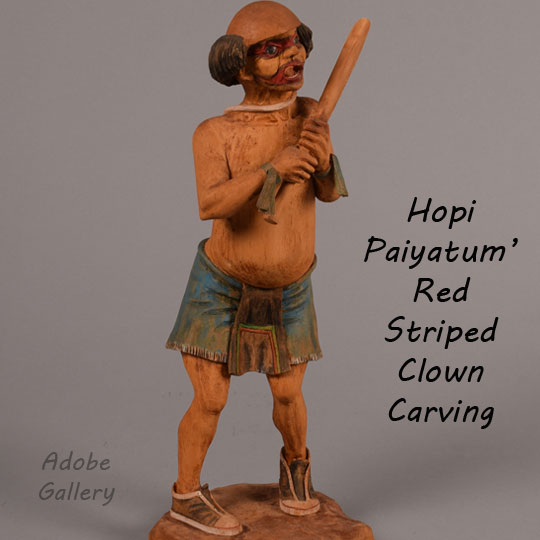 This Hopi Paiyatumn’ Clown carving was made by Cecil Calnimptewa, originally from Moenkopi of the Hopi villages.  He represents one of the Sacred Clowns of the Hopi.  He appears with face and body painted yellow and red stripes across his face.  His head is covered with a representation of a sheepskin wig with his hair exposed.  Around his neck is a small bag of prayer meal which is hanging over his back.  He is wearing a pair of cutoff shorts over which is a loin cloth.  His mismatched pair of sneakers are the type normally worn by this clown.

“Because of the belief that the clowns are coming from the clouds, their entry into the village is always across the rooftops.  Here they make their way, stepping on or over any obstacles or onlookers on the roof tops and behaving like ignorant, rude children until they reach a rooftop above the plaza.  Upon arriving, they crawl to the edge and peer down into the plaza.  They spring to their feet with stentorian yells, throwing their arms wide and subsiding only to repeat this action, usually foru times.  Having announced their presence, they begin to gabble and argue among themselves.  The gist of this noisy diatribe is to suggest  that they are on a mountain top and have just perceived activity in a valley far below them.  They are trying to decide whether, and how, they are going to go down and see what the activity is all about.

“Because it is supposed to be a long line and difficult trip, the clowns enter the plaza from the rooftops in the most ill-conceived, inefficient, awkward, mirth-provoking method they can devise.  Head first down a ladder and falling in a heap at the bottom, or lowered clinging to the end of a long pole or swung inside a tire at the end of a length of rope, invariably they end up in a heap on the plaza floor amid loud exclamations and protests.

“Once there, they seem for a time to be completely oblivious to the kachinas dancing alongside them.  Suddenly, they discover the kachinas and set about trying to find out what they are. They pull and pole, yell remarks, and even drag a kachina out of the dance line to shout questions at him as though he were deaf.  The kachinas never speak and submit gracefully to the rude treatment.” [ibid 13-14]

The clowns continue to harass the katsinas and discover that they bring blessings of good crops, rain, fertility, and health to the Hiopi from the deities.  The clowns then try to claim these benefits for themselves, but they eventually discover that they do not know how to get these benefits.  This back-and-forth between Katsina and clown continues until the katsinas finish their dance and depart the plaza.  The Clowns continue their antics until the katsinas return after their break, and these shenanigans start up again.

Reference: Clowns of the Hopi: Tradition Keepers and delight Makers by Barton Wright