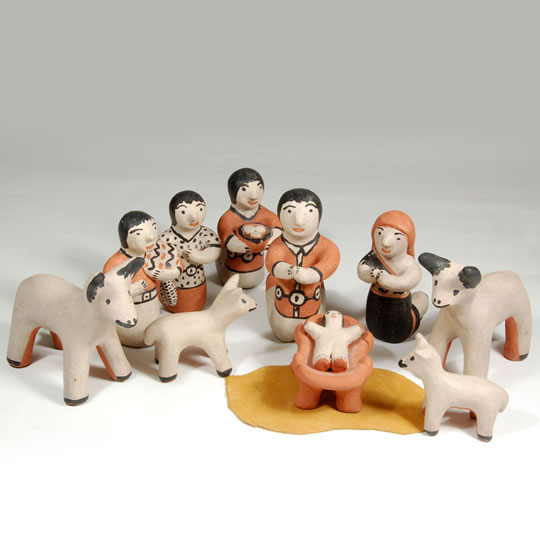 When the book Nacimientos was first published in 1979, the works of only 15 pueblo potters were included.  Only five of these potters were from Cochiti Pueblo. Seferina was not one of this group, but was included in the back of the book in a list of three additional potters known for making sets.

Seferina Ortiz was one of the most respected potters at Cochiti. She specialized in making figurines—storytellers, nacimientos, and animal and human figures.  A collection of 32 items of pottery by Seferina is in the Peabody Museum of Harvard University.  She is considered one of the matriarchs of the potter population of Cochiti Pueblo.  Not only did she leave a legacy of her pottery, she left a legacy in her children—Joyce, Janice, Inez, Virgil, Leon and Angie, some of whom are considered top potters today.

This ten-piece set consists of the Holy Family, Three Kings, and four animals.  Mary is dressed in a traditional pueblo dress that rides over one shoulder and under the other. It is secured by a fabric belt around her waist. Over her head she wears a shawl and she wears traditional white leather moccasins. Joseph wears traditional old-fashioned cotton pants and shirt. He has a concha belt and wears traditional doe skin moccasins. Baby Jesús appears to have no clothes.  He rests in a cradle.

Each of the Three Kings carries a gift for Jesús.  One has ears of corn, one has a bowl of bread, and one has a blanket.  There are two adult sheep and two lambs.

Condition: this Cochiti Pueblo 10-piece Pottery Nacimiento appears to be in original condition

Provenance: from the collection of a New Mexico resident who provided over 100 Cochiti storyteller figurines for our 2015 Holiday Storyteller Exhibit 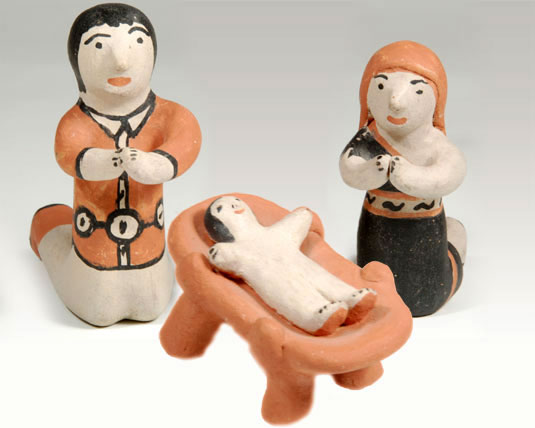