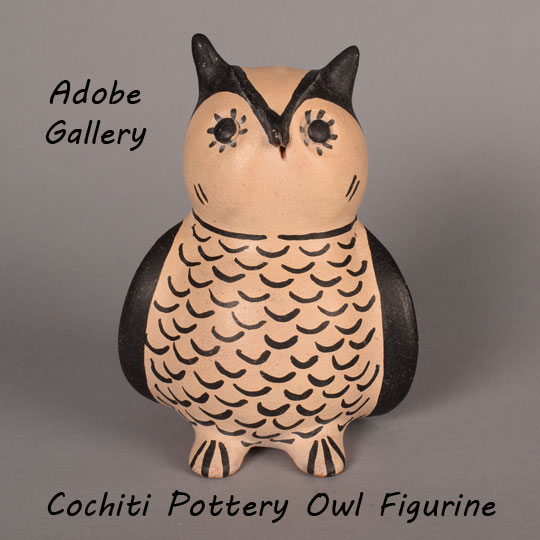 Cochiti Pueblo has a long history of producing figurative pottery. It reached its prime in the last quarter of the nineteenth century and the first quarter of the twentieth century. There was a strong revival in the early 1970s with the production of storyteller figurines.  Some potters at Cochiti expanded beyond the traditional storyteller figurines.  Seferina Ortiz was one of them.

Pueblo potters have been very flexible in providing items that are saleable to tourists and collectors.  It is doubtful that figurines were ever made for in-house use by pueblo people.  From the very first, figurines were made to sell through stores in Santa Fe or during the annual Santa Fe Indian Market.  Potters made bowls and jars for their own use but adapted to providing what buyers wanted.

This figurine is not signed with the name of the maker.

The Native American peoples attach several meanings to the appearance of an owl, but owls are generally seen as messengers from the spirit world to humans. Among the Hopi people, owls represent a warning.

Condition: repairs to the right ear, otherwise in excellent condition.

Provenance: this Cochiti Pueblo Black-on-Cream Pottery Owl Figurine was acquired by Adobe Gallery from a client in Kansas in 2005, sold to a client in New York from whose estate we now have it back to sell.