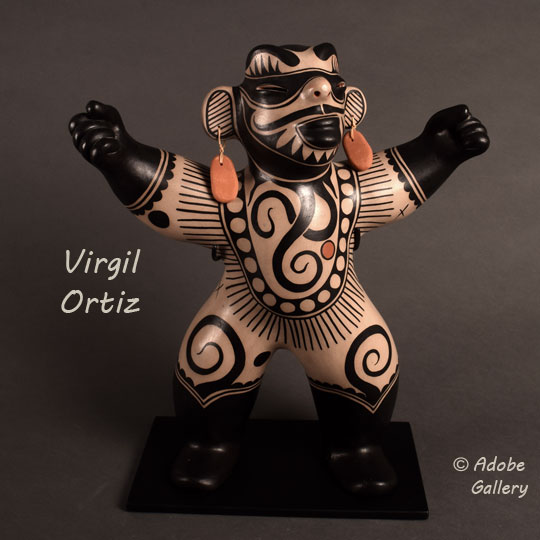 This Cochiti Pueblo Monos figure was created by artist Virgil Ortiz.  This particular piece is an excellent example of Ortiz' revival of the Monos form. The designs are influenced by those that appear on historic pieces, which Ortiz studied extensively while creating his own variations. Spiral forms occupy much of this figure's body. A particularly compelling pair hangs within a larger pattern, which drapes a band of repeating circular forms over the figure's shoulders. Ortiz' work with the figure's form is of incredibly high quality, presenting an evolution from the more primitive style of the early pieces into a smoother, more refined look. Strength and beauty emanate from this piece, and its historical significance is not to be ignored.

In Charles S. King's Virgil Ortiz: Revolution, the artist explains the history of these figures and how they factor into his creative practice: "One of my main inspirations is to keep the monos figurative tradition alive. There are a lot of people who don't know about the pottery the Cochiti people made in the late 1800s. These figures were called ‘Monos,' which sort of means ‘to mimic' or ‘a monkey,' because of their form. They were really about being creative and documenting social commentary of the times... I always get people who say, ‘You are so innovative.' It's not me being innovative. I'm just a revivalist of the monos tradition." Ortiz goes on to explain that much of the early Cochiti figurative pottery was destroyed by conquistadors and priests. Ortiz' goal is to revive these forms and educate younger generations about their history and relevance.

The figurine's left foot is signed and dated Virgil Ortiz, Cochiti Pueblo, 06. The figurine has flat feet and stands securely. A black stand, which cradles the piece by its underarms, is included.

Virgil Ortiz (1969-) is a Cochiti Pueblo potter, jeweler, filmmaker, and fashion designer. Ortiz' mother, Seferina Ortiz, became an influential potter despite waiting until she was in her thirties to begin exploring the art form. Seferina taught Virgil how to make pottery. According to a memory recounted in Charles S. King's Virgil Ortiz: Revolution, Virgil made his first pottery piece at age six. It was an androgynous figure that held a basket. Seferina bought it from Virgil, kept it, and continued serving as teacher and mentor while Virgil learned the art form. With the guidance of his ancestors and his own restlessly creative spirit, Ortiz went on to become one of the most accomplished Native artists of today.

Provenance: this Cochiti Pueblo Contemporary Monos Figure by Virgil Ortiz is from a private California collection