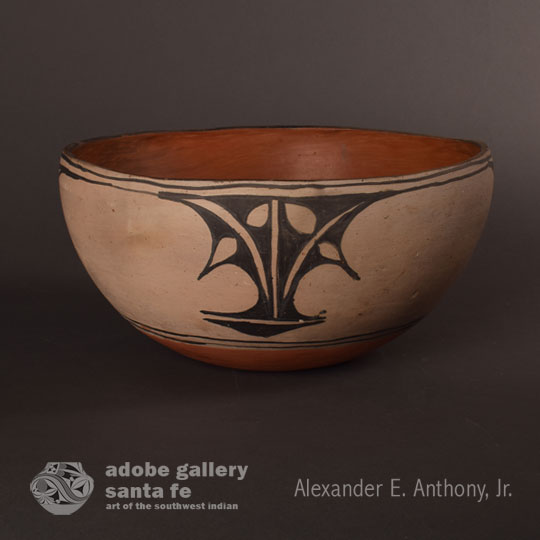 If you were ever invited to share a meal at a pueblo home, you would have seen vegetables or red chile or green chile stew served in a bowl like this.  Such bowls grace the table at all pueblo meals.  This historic bowl, however, shows no evidence of use so you could be the first to put it to use on your table. Bowls of this size are also used when making small amounts of loaf bread.

This Cochiti Pueblo Large Serving Bowl has a beautiful shape.  The wall curves inward as it rises from the mid-body. The rim is painted black and exhibits a ceremonial line break which extends downward breaking the continuity of the design chain.

The design is typically a rain cloud presentation seen on many Cochiti vessels.  Three of the designs have a single rain cloud at the bottom of the design.  The fourth design has a pair of rain clouds because that design panel is divided by the ceremonial break. Cochiti is one of the pueblos which has no restriction on using water symbols on secular pottery.  Their neighbor, Kewa Pueblo - Santo Domingo Pueblo, strictly forbids use of such on its pottery.  It is estimated that the bowl dates to the end of the historic period, circa 1940s, or early in the contemporary period, post 1940s.

Condition: this Cochiti Pueblo Large Pottery Serving Bowl is in very good condition with a hairline crack that has been stabilized.

Provenance: from the collection of a family formerly from Texas