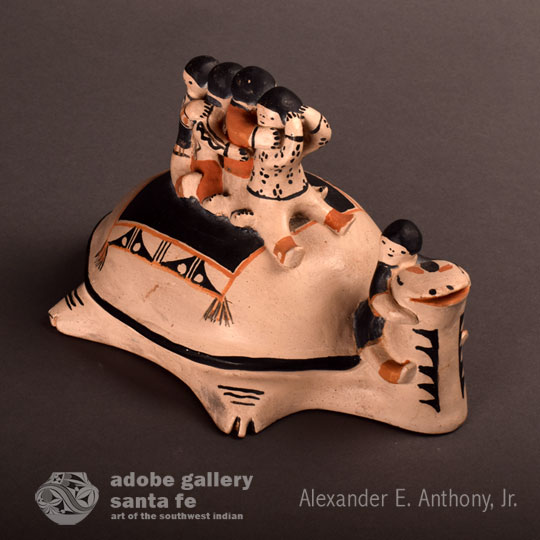 This Cochiti Pueblo pottery figurine by Helen Cordero was known as Mother Turtle by its maker. It is a smiling turtle with a child clutching its neck and four more children seated on a blanket on its shell. Helen Cordero modelled this figuring after a Cochiti Pueblo legend which is that in time of disaster, Mother Turtle will come to the pueblo and rescue the children.

Pueblo potters have always drawn from the venerable traditions of the past, aware of pueblo rules governing those traditions, yet able to create and innovate to their own satisfaction. In doing so, those artists were drawing on history and yet expressing their own artistic talent and creativity.

This was certainly true for Cochiti Pueblo potter Helen Cordero (1915-1994). She was encouraged by her aunt to experiment with making figurative pottery—specifically animals or animalitos. From this beginning, Cordero expanded her repertoire to human and animal figures that told stories. She is best known for creating the pueblo storyteller figurine that was inspired by memories of her grandfather. She also made male seated figures with a drum and drumstick in honor of her husband, Fred, who was a drum maker.

This mother turtle figurine with five children being rescued is a very typical representation of Cordero’s creation. On the back of the turtle are four boys sitting on a saddle blanket and holding on to each other. A single young girl clutches the neck of the turtle. The turtle has a determined look on its face as it moves forward.

The turtle figurine is an older one, probably from the 1980s decade, and is in original excellent condition.  It is signed in her traditional manner of painting her signature in a rectangular area on the underside as Helen Cordero Cochiti, N Mex.

Provenance: from a gentleman in Denver, Colorado