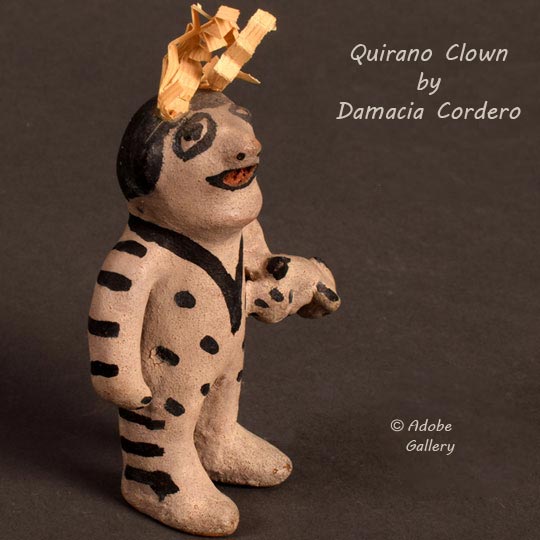 This humorous clown is unmistakably the work of Damacia Cordero.  It is unsigned but is like others of hers that were signed.  This clown, loosely holding his dog under his arm, has a devilish look on his face. His eyeballs jut out as if too large for his eye sockets. That’s a trait of her work. The cornhusks on top of his head represent his hair.

Damacia Cordero (1905-1989) is recognized as one of the twentieth century’s most adept potters at making humorous figurines, whether they are people or animals.  She began making pottery around 1920 and was making Singing Mother figurines in the 1950s. She was the daughter of Lucinda Suina; wife of Santiago Cordero; and mother of Josephine Arquero, Gloria Herrera, Marie Laweka, and Martha Arquero. Her students included her daughters and Dorothy Trujillo.

Provenance: this Cochiti Pueblo Twentieth Century Pottery Quirano Clown by Damacia Cordero is from the estate of Henry Christensen, former attorney at law of New York, who purchased this from us in 2003.