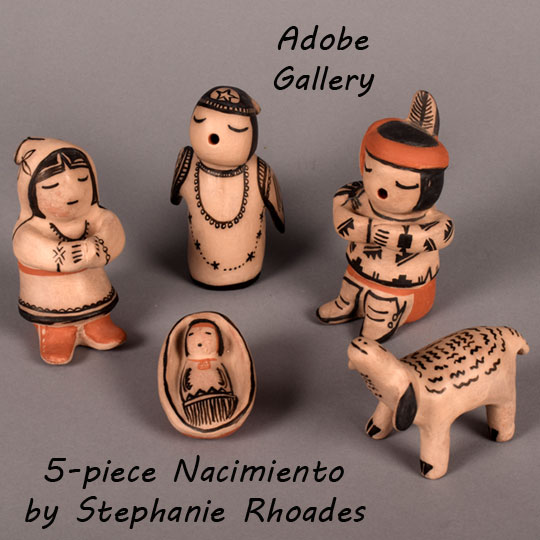 This five-piece Nacimiento by Stephanie Rhoades includes Jesus, Mary, Joseph, an angel, and an ewe.  In this Nacimiento, the animation of the figures makes them appear almost life-like. The angel has her wings pushed back as if ready to fly. She has a prayer feather on her head.   Mary has her hands clasped as if in prayer, and has a prayer feather on her head.  Joseph has one hand against his chest and the other one out as if he is singing.  The ewe has its head lifted high as if listening to Joseph sing.  Baby Jesus is wrapped in a fringed blanket and nestled in a cradleboard.

Snowflake Flower placed prayer feathers on her figurines, something she started doing in 1983 when her daughter went into a coma.  She continued to put feathers on the figures as a prayer for her recovery and that her prayer would be spread through more and more people as they purchased her pottery.  Finally, 16 years later, her daughter awoke from the coma.

Snowflake Flower was named Estephanita after her grandmother, Estephanita Herrera, but she is known as Stephanie or Snowflake Flower.  She is a sister to Ada Suina.  She attended the University of New Mexico and received her BS in Education in 1985.  She started making pottery figurines around 1979 and has specialized in storytellers, Nacimientos, owls and other figurines.

Stephanie Rhoades (1931-2018) Snowflake Flower was an exceptional potter and award winner, and she was featured in a book by Barbara Babcock (see Recommended Reading below).  She made storyteller figurines and Nacimientos that exude an air of nobility yet feature a feeling of pueblo life as well.  She left a wonderful legacy in her pottery figurines.

Provenance: this Cochiti Pueblo 5-piece Nacimiento by Snowflake Flower is from the collection of a family from Santa Fe who purchased it in 1999.

- The Pueblo Storyteller: Development of a Figurative Ceramic Tradition by Barbara Babcock Ph.D.