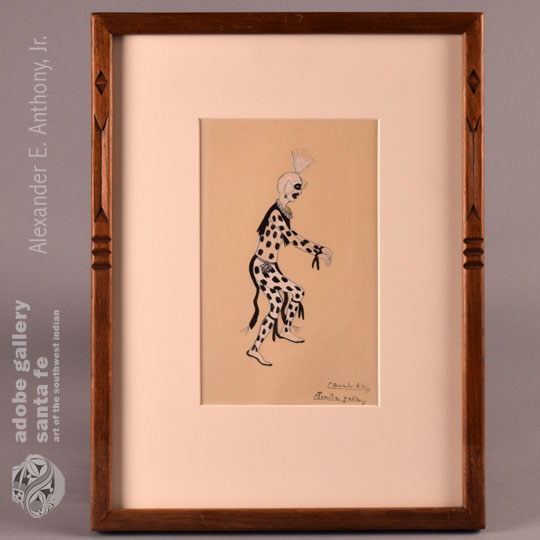 The Clowns are part of the religious celebrations at all the pueblos. They may be called by various names—Tewa Clowns, Koshari, Koosa, etc., but their functions are similar. They are ribald entertainers who dance and cavort during breaks between pueblo dances.

The Quirano clown portrayed in this painting is, like many of her works, a subject that used to appear at the Tewa pueblos but has not for decades until most recently.  The clowns are part of the history she was so fond of from her native Tewa Pueblo.

These clowns still appear at the Keres Pueblos (Cochiti, Santo Domingo), and were, just a few years ago, reintroduced to San Ildefonso Pueblo by the society at Cochiti. Such clowns have black body paint throughout.

The artistic detail on the clown is remarkable, which is what we expect of Tonita Peña.  Pueblo dancers were her preferred subjects, and she always treated them with great care. This clown is depicted in profile and in stride, with his arms outstretched.  He’s white with black spots and wears a loincloth, fringes on his arms and legs, and a scarf around his neck. While the details are most definitely present, the painting feels looser than Peña’s usual.  Here, she uses just a few colors. The outlines are a blue-gray tone. The clown’s body paint is black and white. A single turquoise spot makes the clown’s earring. This is a charming and beautiful image from one of the early pueblo greats.

Condition: this Cochiti Pueblo Quirano Clown in Performance by Tonita Peña of San Ildefonso Pueblo is in very good condition

Provenance: from the collection of a gentleman from Santa Fe

Recommended Reading: Tales of the Cochiti Indians (a 1931 work by Ruth Benedict).