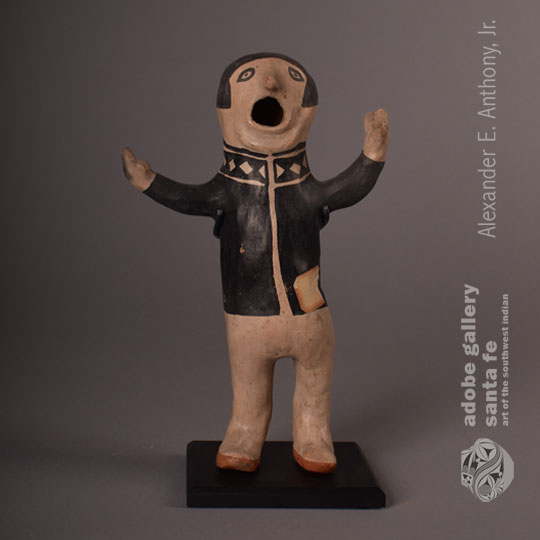 Cochiti Pueblo potters are responsible for providing hundreds of pottery figurines as early as 1880 to satisfy a demand for “Indian curios,” a term coined by merchants in Santa Fe for “curiosities.”  It is not likely that the Cochiti potters dreamed up the scheme on their own but most likely that the merchants needed something unique, mysterious, ceremonial or perhaps just mockingly funny to sell to the influx of tourists arriving on the AT&SF rail line that made its way to New Mexico in 1880.  Even Tesuque Pueblo potters were encouraged to make Rain God figurines, something that did not even exist in their culture but was probably from the fertile mind of Jake Gold, a Santa Fe merchant, and probably based on pre-Columbian figures from Mexico.

These merchants, and there were several of them, are highly responsible for bringing interest to early pueblo pottery—from the finest traditional ceramics to the more obscure figurative style.  They were masters at marketing and, in doing so, created a whole new genre of ceramics.

The Cochiti potters’ most famous figurines were those made in jest of classes of humans such as circus freaks, Santa Fe merchants, cowboys, Spanish Dons or other men (no female figures?) for whom they could have fun mocking with their figurines.  Museum curators detested the debasement of pueblo pottery by the creation of these figurines and they wholeheartedly refused to purchase them for museum collections. Tourists were less critical and, fortunately, they are responsible for the continued production of such and for our enjoyment of the wide variety of these figurines today.  Had it not been for the marketing skills of the merchants, it is not likely that this genre of pottery would even be available today.

This figurine is quite likely a politician or an opera singer.  He is one of the earlier figurines—perhaps as early as 1890—and in excellent condition.  He has a paper label stuck to his waist that was probably a previous dealers price sticker.  It could be removed but we have chosen to leave it on. He was collected in 1900 by a man named Charles Shanfelt from Ohio who manufactured bricks.  He traveled to the Southwest in 1900 and purchased some Cochiti pieces which he took back to Ohio. The pieces were proudly displayed in the county courthouse in Ohio.