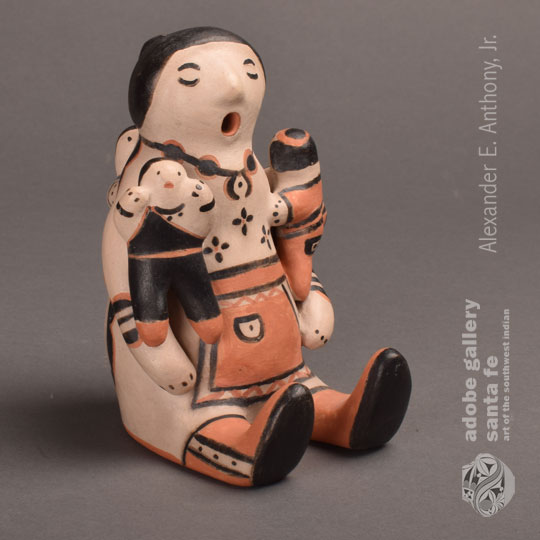 Storyteller figurines by Rita Lewis are sought after by collectors because of their fine detail. This charming storyteller is wearing traditional Cochiti Pueblo style clothing along with a squash blossom necklace and side buttoned moccasins which the artist painted with precision. The creamy ivory slip was applied in an even manner and black and red paint were carefully rendered to depict the faces as well as the details of the clothing. As she tells her story, the storyteller is holding two children in front and one climbs on her back. It is a charming piece. It is signed on the underside Rita Lewis.

When we organized our first storyteller exhibit at Adobe Gallery in Albuquerque in 1979, there were only five potters making these figurines—Helen Cordero, Dorothy Trujillo, Mary Frances Herrera, Seferina Ortiz, and Rita Lewis. Sadly, today, all these potters are deceased.

Provenance: from the collection of a family from Illinois who purchased it from The Rainbow Man in Santa Fe  in 1992.