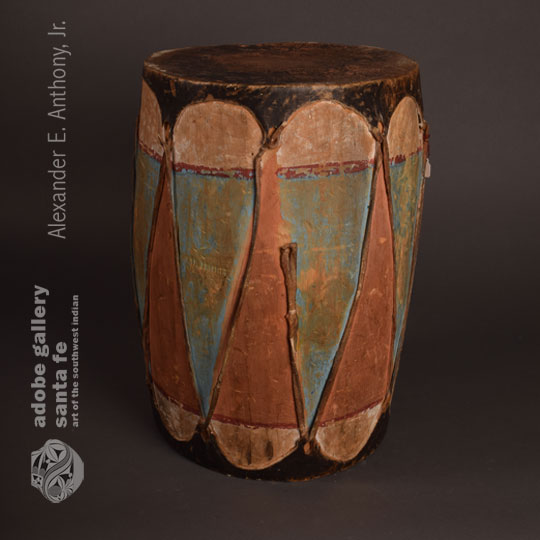 This small Cochiti Pueblo hand-held drum was made from a local cottonwood tree trunk and painted with blue and pink as the primary colors and white and red as minor colors.  Each drum head was painted black.

There are a few condition problems but fortunately they are all on the same side of the drum so there is a good side remaining.  The wood has a couple holes, two of which are all the way through the wood and one which is only partially into the wood. One of the holes was cleverly covered with a piece of paper which was painted to match the drum colors.  Two of the lacing strips are broken but they are next to each other and on the same side of the drum as the holes.

This drum has a very pleasing appearance, is large and impressive so the damage should be accepted as a part of the history of a wonderful old drum that saw much use.

Condition: this Cochiti Pueblo Vintage Drum with Significant Age is as described above