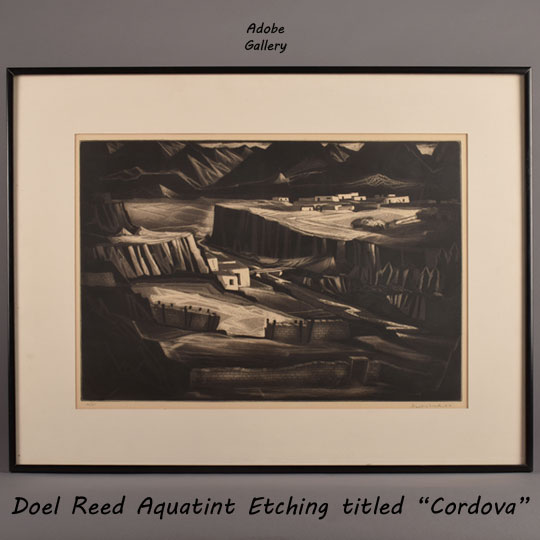 This wonderful aquatint etching was made by New Mexico artist Doel Reed.  The artist’s subject is Cordova, New Mexico, a small town located along what New Mexicans refer to as the High Road to Taos.  More specifically, Cordova—a town of about 400 people, as of the 2010 census—resides right between Chimayo and Truchas.  Reed’s depiction of this small town is moody, atmospheric, and alluring.

In Reed’s “Cordova,” the viewer looks down on the titular town from up above. A band of bright sunlight travels across the image, along the canyon floor.  It lights up the flat earth, the river, the buildings, and one prominently positioned rock formation.  The rest of the image is carefully crafted darkness, with a spectrum of blacks and grays working together to create texture and dimension within the hills, mountains, and rock walls.  What’s truly exceptional about the image is its feeling of balance.  The light and the dark interact with and complement each other beautifully, creating an image that feels both realistic and mysterious.  Reed is frequently referred to as a master of aquatint etching; “Cordova” proves that he is worthy of that description.

The etching is signed Doel Reed and numbered 10/25 in pencil. It is framed under glass and a white mat in a thin black frame.

Doel Reed (1894-1985) was a painter and printmaker who was born in Indiana.  Reed received his formal education from the Art Academy of Cincinnati.  He also served in the military, and was one of the earliest art professors at Oklahoma State University.  Reed made his way to New Mexico in 1959.  A look through his works and list of accomplishments reveals an incredibly versatile artist whose fame and success were well deserved.  He is internationally renowned, and his works are included in prominent museum collections around the world.  Reed passed away in 1985 in Taos, New Mexico. THE LITHOGRAPHS AND ETCHINGS OF E. MARTIN HENNNGS [SOLD]
by