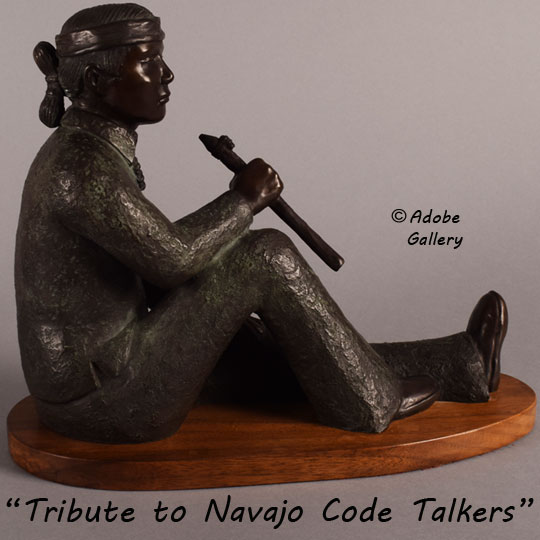 In 1988, Native American artist Doug Hyde was commissioned to create what would become the first permanent memorial to the group known as the Navajo Code Talkers. Hyde's efforts resulted in a massive sculpture titled Tribute to Navajo Code Talkers, which is positioned at the corner of Thomas Road and Central Avenue in Phoenix, Arizona. A number of mock-ups were made and given to those who were involved in the project. This particular piece was given to the president of the company that built the development upon which the main piece is placed. He has passed away, and his family has chosen to make the piece available to the many collectors who appreciate Hyde's work.

Doug Hyde is a veteran of the Vietnam war, and his experience must have influenced this tribute to the Navajo Code Talkers. The young Diné man appears here in traditional garb, holding a flute in his right hand. There are no military tools or uniforms to be seen here-the man is holding an instrument of peace and beauty, which is possible because of the Code Talkers' efforts. The man rests comfortably, with one leg extended and the other bent at the knee. Hyde's work is excellent, and the piece succeeds as both a beautiful object of art and an expression of gratitude for those who have devoted themselves to military service.

The bronze is signed D. Hyde and dated 1988. It is mounted on a wood base.

Doug Hyde is an artist with Nez Perce, Assiniboine, and Chippewa ancestry. Hyde was born in Oregon, and eventually made his way to Santa Fe, New Mexico, where he attended the Institute of American Indian Arts (IAIA). During this period, he befriended and studied with influential Apache artist Allan Houser. Hyde furthered his education at the San Francisco Institute of Art, and then served in the army in Vietnam. After the war, he returned to Santa Fe to continue his sculpting practice and serve as a faculty member at IAIA. He has exhibited widely and successfully in reputable galleries, and is considered to be a strong voice in the world of Native American art.

Provenance: this Doug Hyde "Tribute to Navajo Code Talkers" Bronze Mock-Up was given as a gift to the president of the company that built the development upon which the main piece is placed, and kept in that family's collection until now THE NAVAJOS - Indians of North America Series [SOLD]
by