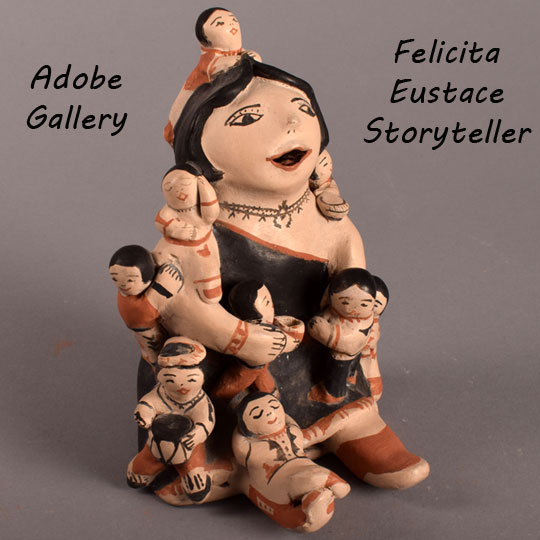 This female storyteller by Cochiti Pueblo artist Felicita Eustace is obviously happy with her story judging by the happy look of her face.  She has a big smile.  The ten children are arranged all over her, front and back.  She is dressed in traditional pueblo clothing, and the children sport a variety of clothing.

There are three children on the back and the remaining seven scattered on front and sides.  Each child is different, as one would expect if they were real children.  Some have smiles, some are attentive, some have objects in their hands, and at least one appears to be asleep. Felicita Herrera Eustace (1927-2016) was the daughter of Domingita and Nestor Herrera of Cochiti Pueblo but she was raised by Laurencita Herrera, who was Seferina Ortiz’s mother.  It appears that the Herrera’s were related and it is often that relatives raise the child of another.  Felicita married Ben Eustace of Zuni Pueblo and they eventually settled at her pueblo.  Felicita reportedly made her first figurine in 1986, but it was not a storyteller figurine.

This storyteller figurine was purchased from Felecita in November 1989 and sold to the client from whom we now have it back.