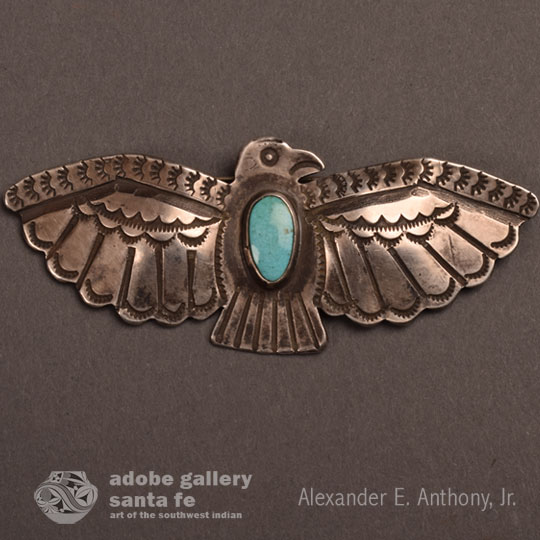 Looking at this thunderbird Navajo jewelry pin is like taking a time machine back into the history of Diné silversmithing. A stunning oval of natural turquoise forms the body of a bird in this Fred Harvey style pin. Its outstretched wings were meticulously rendered with intricate stampwork.

For the first few decades of Diné silversmithing, making jewelry was not a full time occupation. It was not economically feasible. There was land to be plowed, animals to be tended, and crops to be harvested. John Adair notes in the book The Navajo and Pueblo Silversmiths that in addition to those hardships, “Eyestrain in fact was an occupational disease of silversmithing, caused by working in the hogans at night with only the light of kerosene of gasoline lantern . . . In spite of its intermittent character and hazard to eyesight, silversmithing was sufficiently important economically by 1904 to be included along with stock raising and blanket weaving as one of the principal industries of the Navajo Indians.”

By the 1940s, making jewelry for the tourist trade was a major source of income for many Diné families.  Influenced by the marketers and merchants working for the Fred Harvey Company, a technique developed that became synonymous with Southwestern style. Unlike the jewelry smiths made for their own use, or for trade with other tribes, this jewelry was thinner and lightweight.  Instead of using heavy silver in decorations, the pieces were carefully stamped with motifs that tourists associated with the Indian culture. While these stamps of suns, arrows and animals didn’t have any meaning for the native people, they came to be associated with what is now considered to be Indian jewelry.