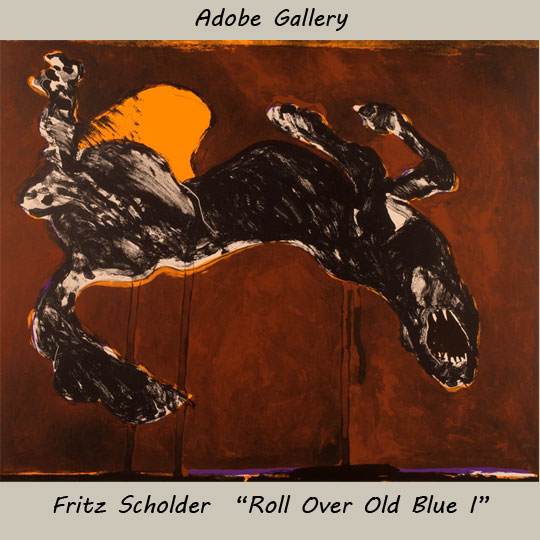 “Roll Over Old Blue I” was created by Fritz Scholder. This first of three states uses black, brown, yellow, and touches of purple to depict its canine subject. Black ink forms much of the dog’s body, but it serves other purposes too, washing over the brown background to form rich textural patterns. Of the three states in which this print was produced, this one might be the most accessible—the brighter tones of State II and the stark black and white of State I might be a bit stronger, but they are likely suited to more specific tastes. State I’s coloration feels refined.

This print was created in 1978 at Scottsdale, Arizona’s Southwest Graphics, a printing workshop that was founded in 1977. Most of Scholder’s lithography work was produced at New Mexico’s Tamarind Institute. This piece maintains a connection to Scholder’s first and most frequent workshop through master printers Lynn Elton Baker and Joy Purmal Baker, who studied and worked at Tamarind before founding Southwest Graphics.

The print is signed Scholder in lower right and labeled “A.P.” in lower left. It is marked with the print shop and printer’s chop marks. It is unframed.