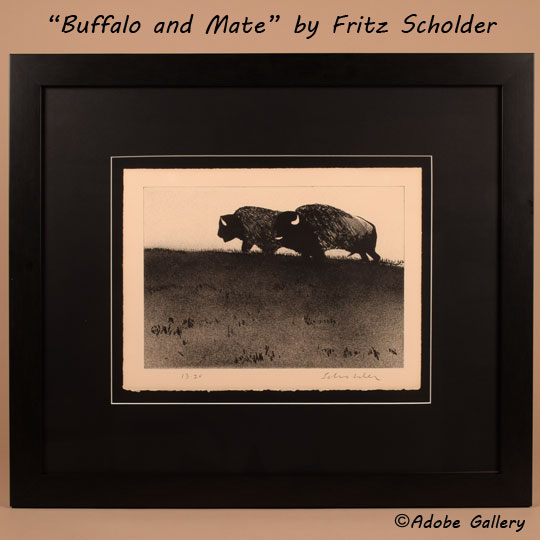 This stone lithograph by Fritz Scholder is titled "Buffalo and Mate." It is a single-color print that was completed in July 1973, in two different states, at Albuquerque's Tamarind Workshop. The first state was a three-color lithograph in an edition of 112. This second state print was completed using just black. The numbered edition for the second state included just twenty prints, and as usual, various proofs were also printed. Both states are pictured in Clinton Adams' Fritz Scholder Lithographs, on pages 98 and 99.

Remarkably, this stark black and white image is just as compelling as its colorful counterpart. A pair of buffalo travel together up a slight hill, with the earth covering about two thirds of the image and the animals occupying much of the rest. The elegant composition is enhanced by the appearance of subtle textural work. The image as a whole feels sweet and beautiful, as well as a bit mysterious due to the obscured faces. This is a fine example of Scholder's lithography work.

The lithograph is signed and marked with the chop marks of Tamarind, Scholder, and Ben Q. Adams. It is numbered 13/20. It is mounted with its edges exposed over a black background, within a black frame and a black mat with a white interior band.

Fritz Scholder (1937-2005) was an influential painter who was by birth one-quarter Luiseño Indian, a California Mission Tribe. He was born in Minnesota, spent two decades in the Dakotas, and lived in Galisteo, NM and Scottsdale, AZ. Scholder came to Santa Fe in 1964 to teach advanced painting and art history at the new Institute of American Indian Arts, a school established by the United States Department of the Interior. Scholder had obtained a Master of Fine Arts degree at the University of Arizona in 1964 before moving to Santa Fe and joining IAIA. Scholder enjoyed a long and successful career and is regarded today as one of the most innovative and influential Native artists.

Provenance: this Fritz Scholder Lithograph "Buffalo and Mate" (Second State) is from a private collection