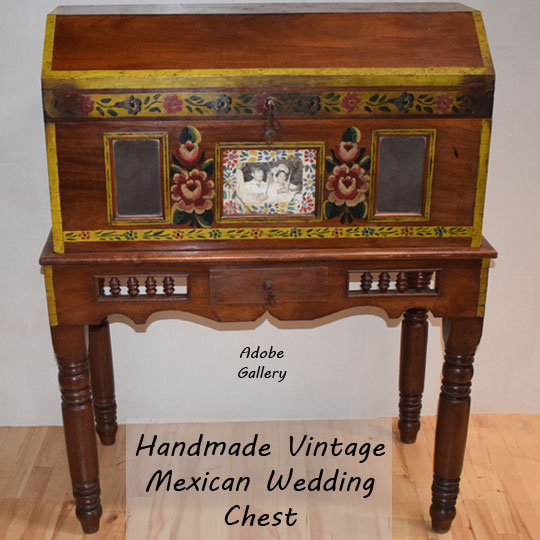 This Handmade Vintage Mexican Wedding Chest is typical of the style made in the city of Puebla, a colonial era city that is the capital and largest city of the state of Puebla, and the second largest in colonial Mexico and the richest Catholic diocese.  It is perhaps equivalent to a “hope” chest of Anglo cultures.

Mexicans have significantly different wedding customs than we are accustomed to.  Some of the customs are a Mexican wedding shirt that has been traditional for a couple hundred years; there are traditional foods and Mariachi music; a religious ceremony that includes a mixture of Aztec and Christian customs; the groom gives the bride 13 gold coins as a symbol of trust; a large rosary bead is placed around the necks of the bride and groom after the ceremony; and there are other traditions, as well.

The wedding chest appears to be a tradition as there are numerous examples of vintage ones on the internet.  In this chest, there is a photograph of the bride and groom on the front of the chest, placed between two framed mirrors.  The chest is beautifully decorated with floral designs.  There is a metal handle for lifting the lid, but it appears that it has been opened for decades with hands placed at the ends of the lid.

The chest rests on a platform with long turned spindle legs.  The chest and foundation platform are two separate pieces.  The style of the chest and the patina would justify a date of the 1930s.  The condition is very good with normal paint abrasions and evidence of use. New Mexican Furniture 1600-1940—The Origins, Survival, and Revival of Furniture Making in the Hispanic Southwest [SOLD]
by