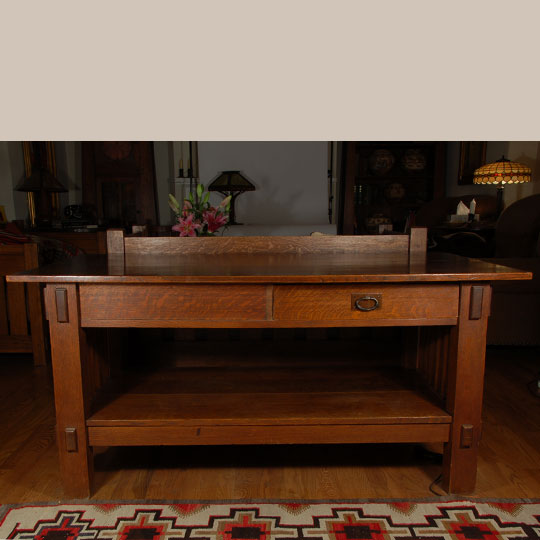 There is no maker's label on this library table.  It was designed with a drawer on opposing sides so two people could sit face to face.  There are thru tenions on front and back and there is a large shelf below. The library table was made from quarter sawn oak.

The Arts and Crafts movement was an international movement in the decorative and fine arts that flourished in Europe and North America between 1880 and 1910, emerging in Japan in the 1920s. Its artistic and social influences were strongly felt in Europe until it was displaced by Modernism in the 1930s and continued among some craft makers, designers, town planners and others long afterwards.

The term was first used by T. J. Cobden-Sanderson at a meeting of the Arts and Crafts Exhibition Society in 1887 although the principles and style on which it was based had been developing in England for at least twenty years. It was inspired by the writings of the architect Augustus Pugin (1812–1852), the writer John Ruskin (1819–1900) and the artist William Morris (1834–1896).

The movement developed earliest and most fully in the British Isles and spread across the British Empire and to the rest of Europe and North America. It was largely a reaction against the perceived impoverished state of the decorative arts at the time and the conditions in which they were produced. It stood for traditional craftsmanship using simple forms and often applied medieval, romantic or folk styles of decoration. It advocated economic and social reform, and has been said to be essentially anti-industrial.

Condition: this Large Mission Oak Partner's Library Table with two Drawers is in very good condition, with normal wear as expected over the past 100 years.

Provenance: Purchased from Allen McNown at the House of Old Things, on the road to Nambe Pueblo, 14 November 1992